A General History of the Pyrates: Pirate Captains, Crews, Ships, and Laws 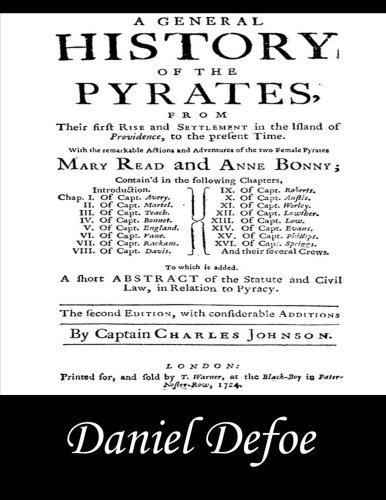 This excellent reference brings out the details of life as a sailor on dark, dangerous seas.

This book introduced many features which later became common in pirate literature, such as pirates with missing legs or eyes, the myth of pirates burying treasure, and the name of the pirates flag the Jolly Roger. The author specifically cites two pirates as having named their flag Jolly Roger, (named after the first Pirate and his crew); Welsh pirate Bartholomew Roberts in June, 1721, and English pirate Francis Spriggs in December 1723.

In giving an almost mythical status to the more colorful characters, such as the infamous English pirates Blackbeard and Calico Jack, the book provided the standard account of the lives of many people still famous in the 21st century, and influenced pirate literature of Robert Louis Stevenson and J.M.Barrie.

Daniel Defoe ( 1660 – 24 April 1731), born Daniel Foe, was an English trader, writer, journalist, pamphleteer, and spy, now most famous for his novel Robinson Crusoe. Defoe is notable for being one of the earliest proponents of the novel, as he helped to popularise the form in Britain, and, along with others such as Samuel Richardson, is among the founders of the English novel. A prolific and versatile writer, he wrote more than 500 books, pamphlets and journals on various topics.

1. A General History of the Pyrates: Pirate Captains, Crews, Ships, and Laws

Description du livre Paperback. Etat : Very Good. The book has been read, but is in excellent condition. Pages are intact and not marred by notes or highlighting. The spine remains undamaged. N° de réf. du vendeur GOR007424829

2. A General History of the Pyrates : Pirate Captains, Crews, Ships, and Laws