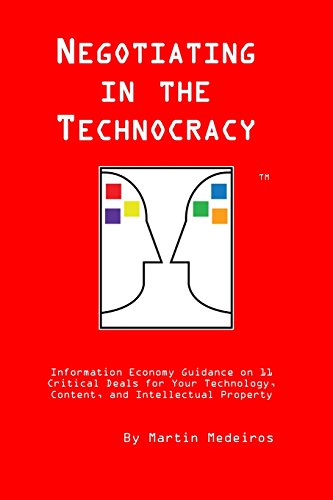 Description du livre Paperback. Etat : New. Language: English. Brand new Book. Information goods, services and software contracts are the last best chance we have to shape a future of our own design as automation takes hold of the economy with self driving cars, automated food servers and the Internet of things taking over tasks once held by humans. Maybe you are one of us, sometimes overwhelmed by technological change and terms that cause anxiety and seem to control our lives. This book puts you back in control of technology and your technological life the easy way. Providing step by step solutions on what to look for in negotiating a technology or intellectual property in your life or business, you will learn how simple transactions can be if you know what to look for and what goals you need to set. The idea for this book came about in the early 20th century where a group of thinkers fancied the day when a "technocracy" would assist humans in avoiding bad decisions, like war. This would be brought about by the use of automation. While that never came to pass as quickly as envisioned, humans are still part of the equation. The trajectory of successful technology is shaped at the negotiation phase. Using a unique systems-based approach of his design, Martin Medeiros demonstrates how technology is able to be negotiated at any level, from the largest companies, governments and retailers to individuals and the smallest of start-ups. This guide shows the real utility of technology and emphasizes that it is approachable, manageable, and that businesses and individuals should never think of technology as magic, or requiring special skills. The idea that we need to be technologists or "techno geeks" to understand technology is losing its grip as the dominant theme in popular culture. "Negotiating in the Technocracy" shows exactly how this is happening by disaggregating complex deals. Negotiating in the Technocracy has detailed approaches to help readers know what they are agreeing to when the click "Term of Service" on a website, sign a lease with an equipment manufacturer, or hire a web developer (for example, you may not often own what you pay for when you hire that web developer). The book is broken up into three sections; the first is how we view technology, and how we should view it; the second section involves how licensing of technology is part of our lives in the technocracy; the third part includes checklists on how to go through eleven transactions and negotiate them successfully, or at least, know what you are committing to when you buy or sell technology. It also includes explanations on what the "boilerplate" terms mean and how they function in a contract. Having started what would become the Negotiation Strategist Research ) project while working as a legal intern at American Airlines in 1993, Martin amassed more than 20 years of experience and data, seen in his numerous articles, two books, and hours of negotiation video. In addition to his extensive authorship credits, Martin has instructed negotiators in a myriad of settings, including Portland State University, Lewis & Clark Law School, Oregon Health and Sciences University, Fortune 500 and Am Law 100 firms. He presently serves on the Board of Oregon Law Institute at Lewis & Clark Law School and advises politicians and executives on optimizing negotiation performance. In addition to practicing law at the Medeiros Law Group, he currently leads a group of consultants and researches contemporary negotiation techniques at NSR. Updates are provided Prior to starting his law firm he worked at K&L Gates (Preston Gates Ellis LLP) where was part of the Business, Intellectual Property, and Cross Border practices. Martin is licensed to practice law in Oregon and Washington and is admitted to practice before the US District Court for the District of Oregon. NḞ de réf. du vendeur APC9781511440455