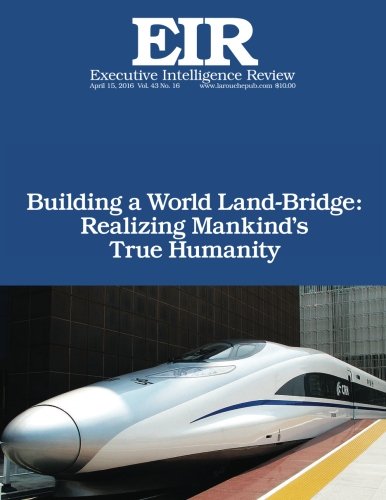 Description du livre Createspace Independent Publishing Platform, United States, 2016. Paperback. Etat : New. Language: English. Brand new Book. The Uniqueness of the Human Mind April 7-Today's Schiller Institute Conference in New York City, "Building a World Land-Bridge-Realizing Mankind's True Humanity," marked a success for Lyndon LaRouche's idea. Although further and fuller reports follow, with more to come in our next issue, that much can already be said with certainty. Helga Zepp-LaRouche opened the conference with a comprehensive and inspiring address, "Beyond Geopolitics and Polarity: A Future for the Human Species." She laid bare the immediate threat of annihilating war, and showed that the idea of the World Land-Bridge, which she developed with her husband from 1989, provides the only durable guarantee for peace. She outlined a dialog of civilizations in which each of the world's civilizations is represented by the cultural high-points of its history, such as Germany's Weimar Classic, and the United States as it was first conceived by Benjamin Franklin and Alexander Hamilton. Helga was followed by former U.S. Attorney General (1966-67) Ramsey Clark, who wove his own long experience into an account of recent world history which underlined the alternative to the war policies of most of the post-Kennedy U.S. Administrations. The next speaker was a truly unique figure from China, that nation's leading professor of journalism and the leader of much else as well, Li Xiguang. Professor Li has led a decades-long pilgrimage on behalf of the Silk Road, -across Central Asia, and down each of the three North-South routes, and back again. He has led no fewer than 500 of his students on this pilgrimage with him since 1990, and has written two volumes on the New Silk Road. Although his goals for the Silk Road are not religious goals-they are the same as ours-Professor Li models himself on the great Chinese cultural heroes, the Buddhist monks Xuanzang (602-664) and Faxian (337-422). Both made long and arduous trips along the Silk Road, and brought back the first real knowledge of much of world civilization to China, including Sanskrit language and culture and Buddhist scriptures in the original. Xuanzang spent no less than 16 years on this voyage, and returned with 600 Indian texts. In 646, at the Tang Emperor's request, he completed his 12-volume work, "Great Tang Records on the Western Regions," now one of the primary sources for the study of medieval Central Asia and India, and the basis for the Sixteenth Century novel Journey to the West, one of the Four Great Classical Chinese Novels. The afternoon session, "The New Scientific Frontiers," highlighted the space program. LaRouche PAC leader Kesha Rogers opened it with a vivid presentation. The climax of that session was a question-and-answer period with Lyndon LaRouche by Skype. He led most of the questions back to the cardinal issue that changes in the physical system, and in the future of mankind, are created by the thinking human mind itself; no animal can do this. Mankind is organized by his own acts of this type; it is these which lead either to failure or to success. This is the mind of the true scientist, of which Einstein is an example. But this account is only a characterization; his actual answers should be studied in detail. The climactic third panel, the musical and cultural panel, began in the evening. To do it justice, rather than trying to cover it below, it will be a major feature of the next issue of EIR. Attendance exceeded 230, not including the core membership. About a dozen foreign countries were represented, whether through diplomats, cultural associations or in other ways. Many musicians attended, and at least five people from the Brooklyn church where we performed the Messiah during Easter. This may have been our largest conference ever. In conclusion: This conference was a victory for an idea of Lyndon LaRouche, that of the Manhattan Project which he unveiled in October 2014. Yet at that time, as Einstein wrote of Kepler, he was "supported by no one and understood by very f. Nį de rťf. du vendeur APC9781532959608