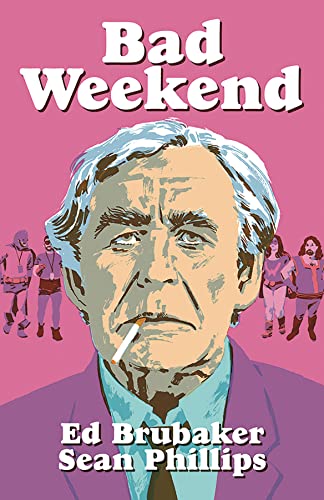 PUBLISHERS WEEKLY -- The lauded crime comics team of Brubaker and Phillips (My Heroes Have Always Been Junkies) take a meta approach with a hard-boiled mystery set at a comics convention. Cartoonist Hal Crane, "a collection of bad habits and worse moods," is traveling to an event clearly based on the San Diego Comic-Con to receive a lifetime achievement award, and his former art assistant Jacob, now a detective, is hired to escort him. The two are quickly embroiled in a mystery involving stolen art, murder, and decades of industry feuds. Set in 1997, when the comics speculation boom of the '90s was going bust and comic books were at a sales peak but a creative nadir, the period's perfect for a tale rife with creative frustration, seedy backroom deals, and betrayal. It helps that the creators know the behind-the-scenes workings of the comic convention inside and out, which lends verisimilitude, as does the semifictional comics history they tell, a blend of reality, gossip (did an inker really get work by procuring sex workers for his editors?), and pure imagination. Phillips's art looks heavily photo-referenced, but poses and layouts that would be stiff in a lesser artist's hands fly by as realistic, while still loose and lively, in his practiced lines. Brubaker proves again that, as in the words of legendary creator Jack Kirby, "Comics will break your heart," as he digs under the colorful surface of his setting and touches on injustices within the industry.


FORBES -- Bad Weekend paints an acid-etched portrait of fandom, comics professionals and Comic-Con itself - one that rings true to anyone with connections to the industry and culture. As comics and comic art have grown in prominence, and the latter has become a very big-money business indeed, it's important to keep it real when it comes to the shady dealings and complicated legacies that form the roots of the industry. It's also entertaining as hell. After more than a dozen years of the award-winning comics-noir series, Brubaker and Phillips know how to blend their art and storytelling styles into a polished page-turner. Bad Weekend from Image Comics will be available in comics shops on Wednesday, July 10 and available in bookstores on Tuesday, July 16. and makes a fine summer read for anyone who's heading to Comic-Con next week, or wishes they were.

Comics will just kill you.

Hal Crane should know, he's been around since practically the beginning. Stuck at an out-of-town convention, waiting to receive a lifetime achievement award, Hal's weekend takes us on a dark ride through the secret history of a medium that's always been haunted by crooks, swindlers, and desperate dreamers.

BAD WEEKEND-the story some are already calling the comic of the year from its serialization in CRIMINAL #2 and 3-has been expanded, with several new scenes added and remastered into a hardcover graphic novel, in the same format as BRUBAKER and PHILLIPS' (KILL OR BE KILLED, FATALE, CRIMINAL) bestselling MY HEROES HAVE ALWAYS BEEN JUNKIES. This gorgeous package is a must-have, an evergreen graphic novel every true comics fan will want to own.

Description du livre Hardcover. Etat : New. Hardcover. JUST IN TIME FOR CONVENTION SEASON -the ultimate comic con crime tale Comics won't just break your heart. Comics will just kill you. Hal Crane should know, he's been around since practical.Shipping may be from multiple locations in the US or from the UK, depending on stock availability. 72 pages. 0.404. Nį de rťf. du vendeur 9781534314405

Description du livre Image Comics, United States, 2019. Hardback. Etat : New. Language: English. Brand new Book. JUST IN TIME FOR CONVENTION SEASON-the ultimatecomic con crime tale! Comics won't justbreak your heart. Comics will just kill you.Hal Crane should know, he's been aroundsince practically the beginning. Stuck at an out-of-town convention, waiting toreceive a lifetime achievement award, Hal's weekend takes us on a dark ridethrough the secret history of a medium that's always been haunted by crooks,swindlers, and desperate dreamers. BADWEEKEND-the story some are already calling the comic of the year from itsserialization in CRIMINAL #2 and 3-has been expanded, with several newscenes added and remastered into a hardcover graphic novel, in the same formatas BRUBAKER and PHILLIPS' (KILL OR BE KILLED,FATALE, CRIMINAL) bestselling MY HEROES HAVE ALWAYS BEENJUNKIES. This gorgeous package is a must-have, an evergreen graphic novelevery true comics fan will want toown.Collects CRIMINAL #2-3 with expandedcontent. Nį de rťf. du vendeur BZV9781534314405