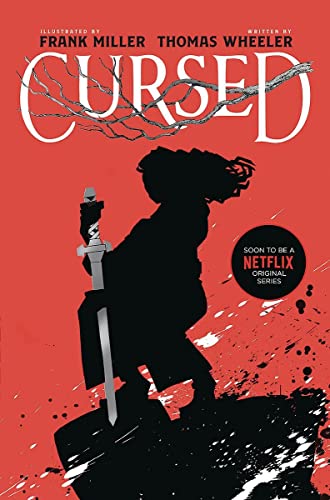 
FROM HER HIDING PLACE IN the straw pile and through eyes filled with tears, Nimue thought Father Carden looked like a spirit of light. It was how he stood, back to the bleached sun, and the way the clouds poured under his draping sleeves and upraised palms, like a man standing on the sky. His trembling voice rose above the din of bleating goats, crackling wood, screaming infants, and wailing mothers. “God is love. It is a love that purifies, a love that sanctifies, a love that unites us.” Carden’s pale blue eyes passed over the piteous, howling mob, prostrated in the mud, barricaded by monks in red robes.

“And God sees,” Carden continued, “and today he smiles. Because we have done His work today. We have washed ourselves clean with God’s love. We have seared away the rotten flesh.” The clouds of smoke billowing around Carden’s arms and legs swirled with flakes of red ash. Spit flecked his lips. “Sawed away the corruption of demonism. Expelled the blackened humors from this land. God smiles today!” As Carden lowered his arms, his draping sleeves dropped away like curtains, revealing an inferno of thirty burning crosses in the field behind him. The crucified were hard to see in the thick black smoke.

Biette, a sturdy block of a woman and mother of four, rose up like a wounded bear and hobbled on her knees toward Carden before one of the tonsured monks in red stepped forward, planted his boot between her shoulder blades and kicked her face-first into the mud. And there Biette stayed, groaning into the wet earth.

Nimue’s ears had been ringing since she and Pym rode into the village on Dusk Lady and saw the first dead body on the trail. They thought it might’ve been Mikkel, the tanner’s boy, who grew orchids for the May rituals, but his head had been crushed by something heavy. They could not even stop to check, for the entire village was on fire and Red Paladins swarmed, their billowing robes dancing with the flames. On the fallow hill, a half-dozen village elders were already burning to death on hastily erected crosses. Pym’s screams had seemed far away to Nimue as her mind went white. Everywhere she looked, she saw her people being choked in the mud or torn from their homes. Two paladins dragged old Betsy by her flailing arms and hair through her pen of geese. The birds squawked and fluttered in the air, adding to the surreal chaos. Shortly thereafter, Nimue and Pym were separated, and Nimue took shelter in the straw pile, where she held her breath as monks stomped past her carrying blanket bundles of confiscated goods. They unfurled the blankets on the floor of the open wagon where Carden stood, spilling the contents around his feet. The priest looked down and nodded, expecting this: roots of yew and alder, wooden figurines of elder gods, totems, and animal bones. Carden sighed patiently. “God sees, my friends. He sees these instruments of demonic conjuring. You cannot hide from Him. He shall dredge this poison out. And shielding others like you will only prolong your suffering.” Father Carden brushed ashes from his gray tunic. “My Red Paladins are eager for your confessions. For your sakes, offer them freely, for my brothers are deft with the tools of inquisition.”

The Red Paladins waded into the mob to single out targets for torture. Nimue watched as family and friends clawed over one another to avoid the paladins’ reach. There were more screams as children were pried from their mothers’ grips.

Unmoved, Father Carden stepped down from the wagon and crossed the muddy road to a tall and broad-shouldered monk in gray. His cheeks were lean beneath his cowl, and strange black birthmarks were blotted around his eyes and ran down his face like streaming tears of ink. Nimue could not hear their words for the shouting around her, but Carden rested a hand on the monk’s shoulder, like a father, and pulled him into a whisper. Head bowed, the monk nodded several times in response to Carden’s words. Carden gestured to the Iron Wood; the monk nodded a final time, then climbed onto his white courser.

Nimue turned to the Iron Wood and saw ten-year-old Squirrel standing in the monk’s path, bewildered, blood dribbling down his cheek as he dragged a sword behind him. At this, Nimue burst from the straw pile and charged at Squirrel. She heard the Gray Monk’s hoofbeats getting louder behind her.

“Nimue!” Squirrel reached for her, and she yanked him against the wall of a hut as the monk thundered past.

“Squirrel, listen to me. Go to the hollow in the ash tree and hide there until it’s night. Do you understand?”

Squirrel tried to pull away from her. “Papa!”

Nimue shook him. “Squirrel! Run now. As fast as you can. Are you listening!” Nimue was shouting into his face. Squirrel nodded. “Be a brave one. Run like you do in our fox races. No one can catch you.”

“No one,” Squirrel whispered, summoning the courage.

“You’re the fastest of us all.” Nimue swallowed back tears, for she did not want to let him go.

“I will,” Nimue promised, “but first I have to find Pym and Mother and your father.”

“I saw your mother near the temple.” Squirrel hesitated. “They were chasing her.”

Ice coursed through Nimue’s veins at this news. She shot a look to the temple at the top of the rise. Then she turned back to Squirrel. “Fast as the fox,” she commanded.

“Fast as the fox,” Squirrel repeated, tensing as he shot furtive glances left and right. The nearest paladins were too occupied with the beating of a resisting farmer to notice them. So without a look back, Squirrel shot across the pasture for the Iron Wood.

Nimue lunged into the road and ran for the temple. She slid and fell in the mud dredged up from horses and blood. As she climbed to her feet, a horseman suddenly swung around from one of the burning huts. Nimue barely saw the ball of iron whip around on its chain. She tried to turn away, but it caught her at the base of her skull with such force it sent her nearly airborne into a pile of firewood. The world unglued as stars burst behind Nimue’s eyes and she felt warm liquid stream down her neck and back. Splayed out on the ground, firewood all around her, Nimue saw a longbow snapped in two pieces beside her. The broken bow. The fawn. The council. Hawksbridge.

It seemed impossible that only a day had passed. And as she lost consciousness, one thought left her choking with dread: this was all her fault. Biographie de l'auteur :

Frank Miller is an award-winning comic book writer, novelist, inker, screenwriter, film director, and producer best known for Daredevil, The Dark Knight Returns, Sin City, and 300, among others. He also created Cursed with Tom Wheeler, which is being adapted as a series for Netflix starring Katherine Langford. Visit him online at FrankMillerInk.com or on Twitter @FrankMillerInk.

Known for his intense, hard-boiled storytelling and gritty noir aesthetic, Frank Miller is one of the most influential and awarded creators in comics, graphic novels, and film. The codirector of Sin City (based on his graphic novel) and an executive producer of 300 (based on his graphic novel series), his projects have been nominated for the Palme d’Or and have won the Harvey and Eisner Awards, including those for Best Writer/Artist, Best Graphic Novel Reprint, Best Cartoonist, Best Cover Artist, Best Limited Series, and Best Short Story. In 2015, Miller was inducted into the Will Eisner Award Hall of Fame for his lifetime contribution to the industry. He is also the creator of Daredevil’s assassin-for-hire, Elektra.

Thomas Wheeler is a screenwriter, producer, showrunner, and the author of The Arcanum. He was the executive producer and creator of Empire for ABC and The Cape for NBC. In feature animation he wrote the Academy Award–nominated Puss in Boots, as well as The Lego Ninjago Movie. Together with Frank Miller, he is cocreator and executive producer of Cursed, based upon the novel of the same name.