Articles liés ŕ The Life of Our Lord in Simple Language for Little...

Anonymous The Life of Our Lord in Simple Language for Little Children: [Illustrated]

The Life of Our Lord in Simple Language for Little Children: [Illustrated] 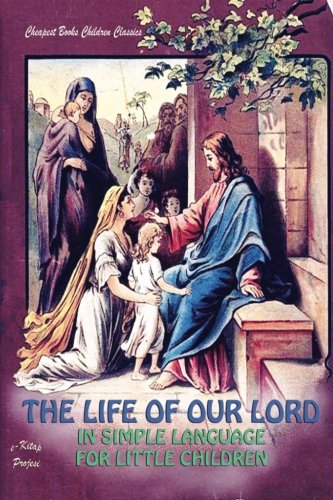 The Life of Our Lord in Simple Language for Little Children: [Illustrated] (Paperback)

Description du livre Paperback. Etat : New. Illustrated. Language: English. Brand new Book. In preparing this brief account of the chief incidents in Our Lord's Life, the writer has endeavoured to keep as close as possible to the sacred text; its divine simplicity being far preferable to any other style of writing the story. The easiest words and those most familiar to children have generally been used and every effort has been made to adapt the volume to the intelligence of the young with the view of instilling into their minds the love of our Saviour for mankind as shown in the beautiful story of His life. KING DAVID. In ages past God made the world: the earth, the sea, the hills, the streams, the trees; the fish, birds and beasts; last of all He made Adam, the first man, and Eve his wife, and they lived in the Garden of Eden. They were quite good at first, but tempted by Satan they ate the fruit of a tree God told them not to eat, and that brought sin into the world; they could not live for ever now, they must die; but that their souls might go to heaven, God's own Son said He would come down on earth and die to save them. God said His Son should be born of Abraham's nation, and should be one of the sons of the line of King David, who sang the sweet psalms in praise of God. Abraham was a good man, so good that God called him His friend; and from him came the people called Jews. David was one of their kings. God always keeps His word, but He makes men wait till it is His time to do as He says; and it was a long, long time after Abraham and David that our Lord came to live among men. At last God sent His angel Gabriel to a young maiden, named Mary, who lived at a town called Nazareth, to tell her that God loved her, and that she should have God's Son for her own son. Our Lord would be her little babe. When Mary saw the angel she was at first afraid, but he said to her, "Fear not, Mary," and he told her that she must call the child's name Jesus-that means Saviour-for He would save the people from their sins. Then Mary must have been glad. She said, "I am God's servant; may His will be done." Mary was to be the wife of her cousin Joseph-they were both of David's family-so the angel went and told him too, that Mary should have God's Son for her own, and that he must call the child Jesus. N° de réf. du vendeur APC9781534727946

The Life of Our Lord in Simple Language for Little Children: [Illustrated]