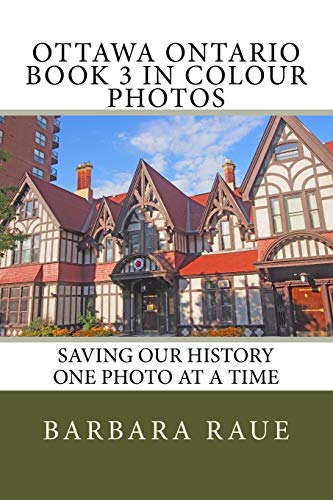 1. Ottawa Ontario Book 3 in Colour Photos: Saving Our History One Photo at a Time (Paperback)

Description du livre Createspace Independent Publishing Platform, United States, 2016. Paperback. Etat : New. Language: English. Brand new Book. Thomas MacKay, a wealthy Scottish stonemason and entrepreneur, helped build the Rideau Canal. Following the completion of the canal, McKay built mills at Rideau Falls, making him the founder of New Edinburgh, the original settlement of Ottawa. With his newly acquired wealth, McKay purchased the 100 acre site overlooking both the Ottawa and Rideau Rivers and built a stone villa in 1838 where he and his family lived until 1855. The building, an eleven-room mansion, was known as MacKay Castle.Following Confederation, Rideau Hall was purchased by the Canadian government as a permanent vice regal residence and home for the nation's first governor general, Lord Monck. Subsequent governor generals expanded and improved the original building to carry out their increasing official duties. Lord Dufferin added the wings on either side of the main entrance in the 1870s. In 1913 when the Duke of Connaught had the new main entrance installed with its carved Royal Coat of Arms in an adapted Florentine architectural style. The architecture styles are Late Georgian, Romanesque and Florentine Renaissance Revival. One of the greatest alterations to the form of Rideau Hall came in 1913 when the Duke of Connaught had the new main entrance installed with its carved Royal Coat of Arms in an adapted Florentine architectural style. The block is three stories in height, and its front is divided by pilasters into five bays, with the central one slightly wider than the equal other four. The windows on the main floor are each surrounded by smaller pilasters beneath a triangular pediment, while the second level windows are each simply framed by a half-round molding surrounded by two flat planes broken at the top by a keystone. A heavy entablature separates the second and third levels, which has less pronounced pilasters and simply framed windows, with the entire facade capped by a narrow cornice and a pediment with a tympanum with the Royal Arms of the United Kingdom. Rideau Hall stands on an eighty-eight acre estate with the main building consisting of approximately 175 rooms totaling more than 100,000 square feet, and there are twenty-seven outbuildings around the grounds.Most of Rideau Hall is used for state affairs, with only 5,400 square feet of its area dedicated to private living quarters and additional areas serving as the offices of the Canadian Heraldic Authority (which is responsible for the creation and granting of new coats of arms - armorial bearings, flags, and badges for Canadian citizens and corporate bodies), and the principal workplace of the governor general and his or her staff.Foreign heads of state are officially received at the palace, as well as both incoming and outgoing ambassadors and high commissioners to Canada, and Canadian Crown ministers. Rideau Hall is the location of many Canadian award presentations and investitures, and where prime ministers and other members of the federal Cabinet are sworn in. There are balls, dinners, garden parties, children's parties, and theatrical productions in the ballroom. The largest event held in the ballroom was a fancy dress ball hosted by the Dufferins that took place on the evening of February 23, 1876 with about 1,500 guests attending. N° de réf. du vendeur APC9781539164784