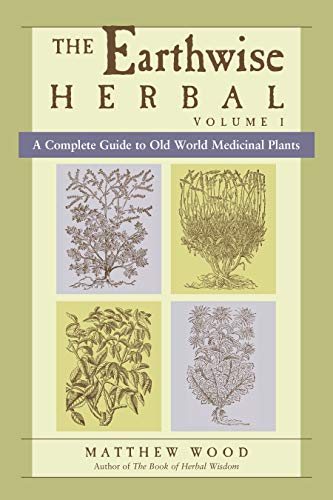 From "Herbalism and Holism"I have called this herbal “earthwise” to contrast it to other herbals reflecting the pharmacological approach. It is based on sources that the scientific approach ignores: historical uses, folk medicine, folk practitioners, the experience of actual herbalists, intuitive concepts of energy, plant properties, and medicine, daydreams, and dreams. It is, however, “scientific” in a broader sense of the word because it follows an organized and reasonably critical approach to understanding plant medicine. The Earthwise Herbal is organized around the concept that each plant has an innate intelligence or core “essence,” as the ancients would have said, binding together the disparate properties and uses into a meaningful and logical or intuitive whole. The compounds in the plant, its appearance, growth habit, ecological niche, and medicinal properties are united by this common personality, intelligence, or essence. This knowledge not only represents the “inwardness” of the thing—as the Quakers would say—but it represents the whole that unites the parts. This approach is thus set upon a holistic foundation.Because the emphasis is placed on the inwardness of the herb, The Earthwise Herbal is more expressly concerned with the use of individual herbs. It describes the properties of individual herbs and does not address their interaction or formulation. It is not written in opposition to formula-making, but in an attempt to help clarify and describe the properties of individual plants.In ancient times single herbs were known as “simples,” in contrast to combinations, or “compounds.” Those who used single herbs were called “simplers.” In general, they were less educated than the college physicians who developed extensive doctrines or systems, classified herbs according to properties (first with energetic systems and later with pharmacology), and used complex preparations (at first compounds, later pharmaceutical products). This herbal follows the approach of the simplers, not only in their use of individual herbs, but in their methods for determining the properties of herbs. As Dr. W. T. Fernie (1914, 1) explains: These primitive Simplers were guided in their choice of Herbs partly by watching animals who sought them out for self-cure, and partly by discovering for themselves the sensible properties of the plants as revealed by their odor and taste; also by their supposed resemblance to those diseases which nature meant them to heal.The simplers have been laughed at because of their use of the “doctrine of signatures” (the plant looks like the disease or organ), but there is a great deal of shrewdness in the observations of Nature made by people who live close to the natural world. Mother Nature is very efficient: plants are streamlined representatives of the forces that have formed them. No shape, color, or pattern is accidental. Form is related to function.I have also attempted to build a knowledge of plant properties based on the scholarly tradition. This started with energetic systems—that is, analysis of plants and diseases by hot or cold, damp or dry, yin or yang, or four or five elements, and so on. These analytical approaches, suited to the intuition, can help to describe herbal properties. Simple pharmacological information has also been included. The knowledge of plant constituents is often helpful in recognizing their potential properties. Taste and odor, referred to by Father Kneipp and Dr. Fernie, are very closely related to energetics and pharmacology.Plants are much older than we are. They have survived ruthless natural selection and have been honed by millennia of threat and stress to become the individuals that they are. Although not intelligent in the sense that we are, every molecule of the plant is held together by a common purpose—survival—and if we can understand the core essence that binds the whole together we can understand what the plant will do for us as a medicine...

“In The Earthwise Herbal, Matthew Wood has revived the richness, depth, and dignity of the herbal medicine of the old masters, while at the same time endowing it with a new cosmopolitan, cross-cultural flavor that lifts it to a genuinely planetary level.”
—Rudolph Ballentine, MD, author of Radical Healing

“Matthew Wood propounds with great clarity, wisdom, and his own experience the gifts the earth in its wisdom has given us in the form of amazing medicines for almost all our ills, whether of body, mind, emotion, personality, or constitution. How refreshing it is to find a new herbal that explores the depths of each plant’s contribution and does not attribute its powers solely or even mainly to its chemical constituents.”
—Anne McIntyre, English Herbalist
“What [Matthew Wood] brings to herbalism is a first-hand sense of the old Western herbal knowledge with each plant steeped in its historic role.”
—The American Herb Association

“Another valuable resource by Wood, a practicing herbalist with 25 years experience under his belt. Part of a two volume set, this complete guide to old world medicinal plants describes the characteristic symptoms and conditions from a holistic perspective.”
—Within Kingston Magazine

Description du livre Paperback. Etat : New. Language: English. Brand new Book. The first part in a comprehensive two-volume guide on the use of medicinal plants in Western herbal medicine--from an author who has almost forty years of clinical experience The first in a two-volume set, The Earthwise Herbal profiles Old World plants (volume two will treat American plants). Organized alphabetically, the book encompasses all the major, and many of the secondary, herbs of traditional and modern Western herbalism. Author Matthew Wood describes characteristic symptoms and conditions in which each plant has proved useful in the clinic, often illustrated with appropriate case histories. He also takes a historical view based on his extensive study of ancient and traditional herbal literature. Written in an easy, engaging, non-technical style, The Earthwise Herbal offers insight into the "logic" of the plant: how it works; in what areas of the body it works; how it has been used in the past; what its pharmacological constituents indicate about its use; and how all these different factors hang together to produce a portrait of the plant as a whole entity. Ideal for beginners, serious students, or advanced practitioners, The Earthwise Herbal is also useful for homeopaths and flower essence practitioners as it bridges these fields in its treatment of herbal medicines. NḞ de réf. du vendeur AAC9781556436925