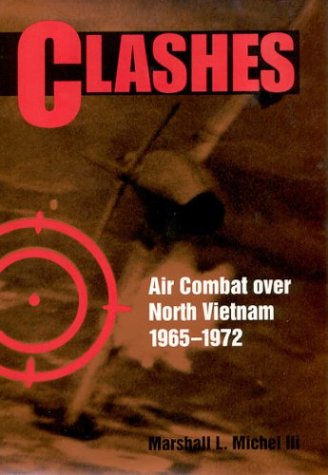 This classic work, which is part of the Marine Corps reading list, makes full use of declassified US documents to offer the first comprehensive study of fighter combat over North Vietnam. Marshall Michel's balanced, exhaustive coverage describes and analyses both Air Force and Navy engagements with North Vietnamese MiGs, but also includes discussions of the SAM threat and US countermeasures, laser-guided bombs and US attempts to counter the MiG threat with a variety of technological equipment. Beginning with the first air-to-air engagements of Operation Rolling Thunder in 1965, Marshall Michel describes the initial American successes against the MiGs and the stunning turn of events in late 1967 when the North Vietnamese began shooting down more US aircraft than they lost. He explains how in 1968, at the end of Rolling Thunder, the US Air Force ignored problems with their tactics, formations and missiles, while the US Navy undertook a complete reassessment of its air-to-air operations and formed its famous Topgun course. The second part of the book, covering Operation Linebacker in 1972, examines the results of these two approaches and how the Navy scored heavily against the MiGs while the Air Force continued to suffer losses to MiG-21s. Michel offers extraordinary insights into events that lead to this situation and the Air Force's efforts to reverse the trend. Accessible yet professional, Clashes is filled with valuable lessons that are as valid today as they were in the 1960s and 1970s. This book includes 15 photographs and 45 drawings and maps, including diagrams of both American and North Vietnamese formations and tactics. Marshall Michel retired from the US Air Force in 1992 after 26 years of service. He flew 321 combat missions over Vietnam. He now lives in Brussels and New Orleans.