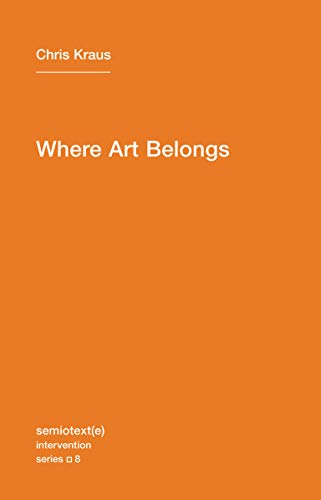 Where Art Belongs Chris Kraus examines artistic enterprises of the past decade that reclaim the use of lived time as a material in the creation of visual art. Full description

In Where Art Belongs, Chris Kraus examines artistic enterprises of the past decade that reclaim the use of lived time as a material in the creation of visual art. In four interlinked essays, Kraus expands the argument begun in her earlier book Video Green that the art world is interesting only insofar as it reflects the larger world outside it. Moving from New York to Berlin to Los Angeles to the Pueblo Nuevo barrio of Mexicali, Kraus addresses such subjects as the ubiquity of video, the legacy of the 1960s Amsterdam underground newspaper Suck, and the activities of the New York art collective Bernadette Corporation. She examines the uses of boredom, poetry, privatized prisons, community art, corporate philanthropy, vertically integrated manufacturing, and discarded utopias, revealing the surprising persistence of microcultures within the matrix. Chronicling the sometimes doomed but persistently heroic efforts of small groups of artists to reclaim public space and time, Where Art Belongs describes the trend towards collectivity manifested in the visual art world during the past decade, and the small forms of resistance to digital disembodiment and the hegemony of the entertainment/media/culture industry. For all its faults, Kraus argues, the art world remains the last frontier for the desire to live differently.

"The other super fascinating thing in this book is an essay called "Indelible Video" which ends with the idea that "it could be that corporations themselves are in the position to change the rules of the game and reclaim the creativity that was once art s domain." This essay is a total milestone. Chris Kraus basically reviews American Apparel as a work of art "breathtakingly brilliant in ambition and scope." And further states that: "entrepreneurial ventures like American Apparel fill the void left by avant-garde process-art objects of the last century." This reminds me of the Wrath of Dynasty booklet "The Ecstasy of Betrayal," reprinted in Novembre, wherein I hint that "mass entrepreneurship" is the new thing, the new way of working out our visions for a total art, an artwork that is limitless and omnipresent totally liquid. And wherein I refer to The Coming Insurrection as the ultimate marketing textbook. Indelible Video is so fascinating and consequential that it can t be summarized here, however it is way worth the price of the book. It s a sprawl of marketing, video art, technology, ambient cool, the matrix, and "the transaction of business, which ... has become more erotic than sex"." --Jon Leon, www.agioteurs.com