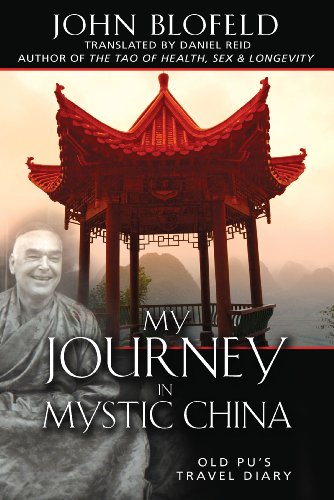 Roaming the Famous Mountains and Monasteries of Northern China

The Mysterious Phenomenon of the Bodhisattva Lights

As we set forth on our journey up Mount Wutai, the sky was gray and overcast, and the mountain peak stood dim in the distance, sometimes shrouded in white mist, sometimes completely concealed by clouds. Before long, our clothing grew damp. The road was slippery and difficult to traverse, slowing the mules and horses down to a plodding pace. That evening we lodged at a small monastery, and the next morning we continued our ascent in the rain. The mountain trail was even more slippery than the day before, so we had no choice but to dismount our horses and proceed on foot. Originally we had anticipated viewing the Bodhisattva Lights that evening, but the groom informed us that during inclement weather there were no unusual phenomena of any kind to be observed there.
Just as we were sighing with disappointment, the sky began to clear. As the sun set in the west, the clouds dissolved and the mist scattered. When night descended, the entire sky filled with stars. Upon arrival at the peak, we took lodging at an ancient mountain monastery, where there were only three or four monks. The monastery had very few bedrooms, so our only option was to sleep on the floor planks of the reception room. Even though we spread out our blankets and it was the summer season, the nights up in the high mountains were nevertheless still very cold. The monks lent us a pile of their thickly padded bedquilts, and since our little group slept closely nestled together, we slipped comfortably into sweet slumber.
Late in the night, we were suddenly startled awake, and as we opened our eyes we saw a monk standing in the doorway and shouting at us, “Get up, get up, hurry out to the terrace to see the Bodhisattva Lights!” The moment we heard that we scurried to our feet, threw on a few pieces of clothing, and, though we draped ourselves with quilts as substitutes for our padded coats, we still felt very cold. We ran out to our padded coats, we still felt very cold. We ran out to the terrace, where it was even colder, making our bodies shiver from head to foot, but our hearts were filled with excitement as we focused our attention on viewing the mysterious phenomenon of the famous sight before our eyes.
As we stood on the terrace outside the monastery, scanning the expanse of the horizon, we saw thousands of strange objects floating slowly above the terrace. These extraordinary globe-shaped entities approached from faraway and disappeared again into the distance, continuously radiating golden beams of light, as though the whole sky were filled with countless glowing lanterns. Their shape, color, size, and other features were all exactly alike, without any noticeable variations. These myterious orbs moved across the sky at about the same speed as goldfish swimming calmly in water. However, because there was no way to judge the distance beween these curious objects and the terrace, it was difficult to determine their size.
The Bodhisattva Lights could not have been etheric objects. Instead, they appeared to be physical entities with both substance and duration, and one could clearly discern that they were light and delicate, otherwise how could they float in the sky? Only those with strong faith in Buddhist doctrine would think otherwise. They would believe that these things were neither light nor heavy objects, but rather that they were the radiant light emanating from the enlightened heart of Manjusri Bodhisattva.
What I have said above is all based on later conjectures. At that time, we all just stood there astounded beyond bounds, stammering at each other, speechless with wonder. Not yet able to even speculate on the possibility of such a mysterious phenomenon manifesting in the sky, we simply stood in awestruck silence in order to appreciate its unfathomable nature.
That was 50 years ago! Until this very day I still find it very difficult to explain this phenomenon. In those days, most people believed that it really was an emanation from the luminous awareness of a bodhisattva. And perhaps this was in fact the case, for I have no grounds to dispute such a claim. People in modern times, even if they are Buddhists, generally find it difficult to really believe in the existence of supernatural phenomena in this world. Even I, while actually witnessing this startling marvel, felt no doubt in my mind that it was an arcane mystical phenomenon. Later, however, when I tried to analyze it with reason and logic, I found myself searching for a theoretical basis to explain the origin of this phenomenon. But up until today, I still have not found a suitable scientific answer, only a lingering doubt.
At the time, I did not inquire whether or not the Bodhisattva Lights occurred in all four seasons, but in any case, it was certainly not limited to any particular days. When Dr. Chang and his group invited me to travel with them, they did not specify a special day to ascend the peak of the mountain. Nor did I ask whether the Bodhisattva Lights were only to be seen on one peak, or if they could also be observed from the other peaks. I think someone from a big travel agency in China would know. Ever since the Buddhist monasteries on Mount Wutai were wrecked by the Japanese army, and the suppression of religion by the Red Guards which followed later, very few travelers went to that mountain. Only recently have people once again begun to mention the various famed sights of Mount Wutai. During the intervening decades, the situation at this sacred mountain has no doubt changed. People today may not even know that Mount Wutai has such a marvelous phenomenon as the Bodhisattva Lights. Nor have I asked anyone lately whether people still climb up to the peak to witness this extraordinary display.

"This is John Blofeld’s intimate and heartfelt personal account of a life spent in the old China we have all heard and dreamt about, but which is gone forever. As such it should be savored as a first-class treasure, for it is like a long-lost gem recovered for the world to appreciate. What makes John Blofeld’s memoir so uniquely special is the man himself, who, as international traveler, sinologist, translator, and scholar embodied the perfect balance of Yin and Yang; an ideal synthesis of the meeting of East and West." (Chungliang Al Huang, author of Embrace Tiger, Return To Mountain and founder of the Living Tao Found)

"The discovery of a missing manuscript of Mozart could not bring greater joy than John Blofeld's memoir of his journey through a China that is barely visible nowadays but brought to life once more in this most welcome translation. To read this book is to travel again with this marvelous man on the path he walked so well: the path of the translator, the path of the pilgrim, the path of a stranger in a strange land. The bodhisattvas must be singing." (Bill Porter (Red Pine), translator and editor of The Collected Songs of Cold Mountain)

"When all is said and done, we owe Daniel Reid a great debt for translating this wonderful travel journal. . . . although 'mystic' appears in the title, this is not really a magical mystical tour and you won't get any tidbits about finding your bliss, so to speak. You basically find what a well-lived life can be like." (Robert Figler, Ph.D., Journal of Asian Martial Arts, Vol. 17 No. 3)

"It is fitting that Daniel Reid, whose writings have done so much to bring profound dimensions of Chinese medical, scientific, spiritual, and meditative wisdom to English language readers, has translated this book." (Reg Little, New Dawn, No. 110, Sep/Oct 2008)

" The book is not, strictly speaking, a history of the 1930s and 1940s in China, but for readers looking to gain a deeper understanding of that period, the book will prove quite valuable. It will also be useful to those wishing a deeper understanding of pre-communist Chinese religion and culture, as well as to casual readers who are simply seeking an engaging informative book about China during its early republican period." (Elizabeth Redkey, MultiCultural Review, Vol. 17, No. 4, Winter 2008)

"A vivid portrait of this lost land . . . of interest to any Chinese history enthusiast." (The Midwest Book Review, Aug 2008)

"The book reads like a charming account from a long-forgotten era, and that is precisely what it is. Blofeld gives a detailed and scintillating portrait of ancient China, still extant when he lived there--a culture that was highly stratified and regimented, and included the virtues of always welcoming 'guests from afar' such as Blofeld himself, who made a comfortable niche for himself by being the perfect visitor." (Curled Up with a Good Book, June 2008)

My Journey in Mystic China

My Journey in Mystic China

MY JOURNEY IN MYSTIC CHINA: OLD