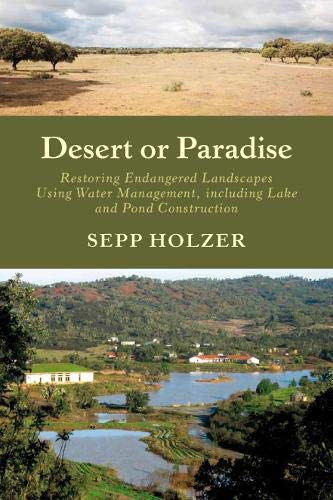 Sepp Holzer was born in the Province of Salzburg, Austria. He is a farmer, author and an international consultant for natural agriculture. He took over his parents' mountain farm business in 1962 and pioneered the use of ecological farming, or permaculture, techniques at high altitudes (1,100 to 1,500 meters above sea level) after being unsuccessful with regular farming methods. Sepp has been known as the 'rebel farmer' for his persistence despite being fined and threatened with prison for practices such as not pruning his fruit trees. He has also created some of the world's best examples of using ponds as reflectors to increase solar gain for passive solar heating of structures, and of using the microclimate created by rock outcrops to effectively change the hardiness zone for nearby plants. Sepp conducts permaculture ('Holzer Permaculture') seminars at his farm and worldwide, while continuing to work on his alpine farm. His farm now spans over 45 hectares of forest gardens, with 70 ponds, and is said to be the most consistent example of permaculture worldwide. He is author of several books and the subject of the film The Agricultural Rebel. He works nationally as a permaculture activist in the established agricultural industry, and works internationally as adviser for ecological agriculture.

Sepp Holzer is renowned the world over for bringing degraded landscapes back to life using his unique methods of creating water retention basins. In Desert or Paradise he inspires us to look beyond previously tried, tired and failed solutions to drought by following his catalogue of successes, furnishing each case study with photographs, illustrations and anecdotes. These restored or newly-constructed lakes not only re-aquify the surrounding landscape to turn back the tide of encroaching desertification, but also support abundant edible landscapes of orchards and crops planted along the banks, and provide freshwater mixed aquacultures. Desert or Paradise explains why natural water management is at the centre of any earth restoration. Injected with Sepp's unique style and opinions, Desert or Paradise gives hope to those who see an apparently barren landscape as a failure from which there is no return. Sepp helps us move beyond conventional methods that trap us in a cycle of dependence. He offers a wealth of information for the gardener, smallholder and alternative farmer, yet the book s greatest value is in the attitudes he teaches. He reveals the thinking processes based on principles found in nature that create his productive systems. These can be applied anywhere.

Description du livre Chelsea Green Publishing Co, United States, 2012. Paperback. Etat : New. Language: English. Brand new Book. Sepp Holzer farms steep mountainsides in Austria 5,000 feet above sea level. His farm is an intricate network of terraces, raised beds, ponds, and waterways, well covered with productive fruit trees and other vegetation, in dramatic contrast to his neighbors' spruce monocultures. Fans of Sepp Holzer have come from all over the world to see the productivity of his farm, a veritable permaculture paradise. His first book, Sepp Holzer's Permaculture, offers a detailed guide to what Holzer has achieved on his farm. Many readers might have wondered-but how can we achieve this on a global scale? Luckily, his newest book, Desert or Paradise, examines Holzer's core philosophy for increasing food production, earth health, and reconnecting mankind with nature, applied to reforestation and water conservation across the world.Through years of consultation with other countries, Holzer has developed a core philosophy for reconnecting mankind with nature even in arid or otherwise "lost-cause" regions. He details a process he calls "Grundierung," a term from painting meaning "base coat," which goes into great detail the importance of water, and Desert or Paradise offers his concept and guide to construction of large water reservoirs in arid, rainfall-dependent regions with examples from Greece, Turkey, Spain, and Portugal. Holzer describes the ecological and economic benefits of these changes, as well as the use of a variety of plant and animal species for further integration and regeneration of the surrounding areas, including reasons for reforestation and the cause and use of forest fires.Holzer also outlines his ten points of sustainable self-reliance and how these methods can help feed the world, such as the need to regulate the water budget, eliminate factory livestock farming, bring more fallow or unused areas into production, enlarge crop areas by using terracing and Holzer-style raised beds, regionalize instead of globalize, fight for land reform and engage in community building, go back to the ancient farming wisdom, and change the educational system. Also included are Holzer's ideas on beekeeping, humane slaughtering, nature spirits, the loss of roots in our society in general, and in politics especially. N° de réf. du vendeur AAC9781603584647

Description du livre Paperback. Etat : New. Paperback. Sepp Holzer farms steep mountainsides in Austria 5,000 feet above sea level. His farm is an intricate network of terraces, raised beds, ponds, and waterways, well covered with productive f.Shipping may be from multiple locations in the US or from the UK, depending on stock availability. 206 pages. 0.450. N° de réf. du vendeur 9781603584647