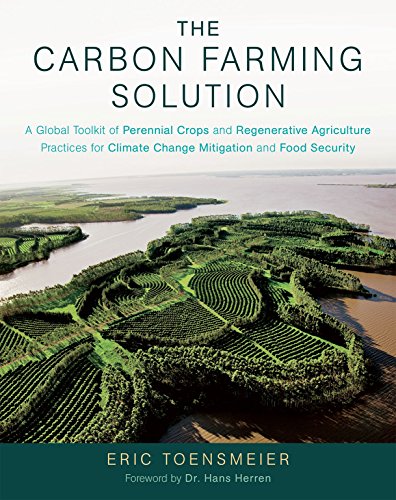 Agriculture is currently a major net producer of greenhouse gases, with little prospect of improvement unless things change markedly. In The Carbon Farming Solution, Eric Toensmeier puts carbon sequestration at the forefront and shows how agriculture can be a net absorber of carbon. Improved forms of annual-based agriculture can help to a degree; however to maximize carbon sequestration, it is perennial crops we must look at, whether it be perennial grains, other perennial staples, or agroforestry systems incorporating trees and other crops. In this impressive book, backed up with numerous tables and references, the author has assembled a toolkit that will be of great use to anybody involved in agriculture whether in the tropics or colder northern regions. For me the highlights are the chapters covering perennial crop species organized by use staple crops, protein crops, oil crops, industrial crops, etc. with some seven hundred species described. There are crops here for all climate types, with good information on cultivation and yields, so that wherever you are, you will be able to find suitable recommended perennial crops. This is an excellent book that gives great hope without being naďve and makes a clear reasoned argument for a more perennial-based agriculture to both feed people and take carbon out of the air. Martin Crawford, director, The Agroforestry Research Trust; author of Creating a Forest Garden and Trees for Gardens, Orchards, and Permaculture

Eric Toensmeier is the award-winning author of Paradise Lot and Perennial Vegetables, and the co-author of Edible Forest Gardens. Eric is an appointed lecturer at Yale University, a Senior Fellow with Project Drawdown, and an international trainer. He presents in English and Spanish throughout the United States, Canada, Mexico, Guatemala, and the Caribbean. Eric has studied useful perennial plants and their roles in agroforestry systems for over two decades, and cultivates about 300 species in his urban garden. His writing can be viewed online at perennialsolutions.org.

Description du livre Chelsea Green Publishing Co, United States, 2016. Hardback. Etat : New. Language: English. Brand new Book. With carbon farming, agriculture ceases to be part of the climate problem and becomes a critical part of the solutionAgriculture is rightly blamed as a major culprit of our climate crisis. But in this groundbreaking new book, Eric Toensmeier argues that agriculture-specifically, the subset of practices known as "carbon farming"-can, and should be, a linchpin of a global climate solutions platform. Carbon farming is a suite of agricultural practices and crops that sequester carbon in the soil and in above-ground biomass. Combined with a massive reduction in fossil fuel emissions-and in concert with adaptation strategies to our changing environment- carbon farming has the potential to bring us back from the brink of disaster and return our atmosphere to the "magic number" of 350 parts per million of carbon dioxide. Toensmeier's book is the first to bring together these powerful strategies in one place, including in-depth analysis of the available research and, where research is lacking, a discussion of what it will take to get us there. Carbon farming can take many forms. The simplest practices involve modifications to annual crop production. Although many of these modifications have relatively low sequestration potential, they are widely applicable and easily adopted, and thus have excellent potential to mitigate climate change if practiced on a global scale. Likewise, grazing systems such as silvopasture are easily replicable, don't require significant changes to human diet, and-given the amount of agricultural land worldwide that is devoted to pasture-can be important strategies in the carbon farming arsenal. But by far, agroforestry practices and perennial crops present the best opportunities for sequestration. While many of these systems are challenging to establish and manage, and would require us to change our diets to new and largely unfamiliar perennial crops, they also offer huge potential that has been almost entirely ignored by climate crusaders. Many of these carbon farming practices are already implemented globally on a scale of millions of hectares. These are not minor or marginal efforts, but win-win solutions that provide food, fodder, and feedstocks while fostering community self-reliance, creating jobs, protecting biodiversity, and repairing degraded land-all while sequestering carbon, reducing emissions, and ultimately contributing to a climate that will remain amenable to human civilization. Just as importantly to a livable future, these crops and practices can contribute to broader social goals such as women's empowerment, food sovereignty, and climate justice. The Carbon Farming Solution does not present a prescription for how cropland should be used and is not, first and foremost, a how-to manual, although following up on references in a given section will frequently provide such information. Instead, The Carbon Farming Solution is-at its root-a toolkit. It is the most complete collection of climate-friendly crops and practices currently available. With this toolkit, farmers, communities, and governments large and small, can successfully launch carbon farming projects with the most appropriate crops and practices to their climate, locale, and socioeconomic needs. Toensmeier's ultimate goal is to place carbon farming firmly in the center of the climate solutions platform, alongside clean solar and wind energy. With The Carbon Farming Solution, Toensmeier wants to change the discussion, impact policy decisions, and steer mitigation funds to the research, projects, and people around the world who envision a future where agriculture becomes the protagonist in this fraught, urgent, and unprecedented drama of our time. Citizens, farmers, and funders will be inspired to use the tools presented in this important new book to transform degraded lands around the world into productive carbon-storing landscapes. N° de réf. du vendeur BZV9781603585712

Description du livre 2016. Hardcover. Etat : New. Hardcover. With carbon farming, agriculture ceases to be part of the climate problem and becomes a critical part of the solution Agriculture is rightly blamed as a major culprit of our c.Shipping may be from our Sydney, NSW warehouse or from our UK or US warehouse, depending on stock availability. 512 pages. 1.945. N° de réf. du vendeur 9781603585712