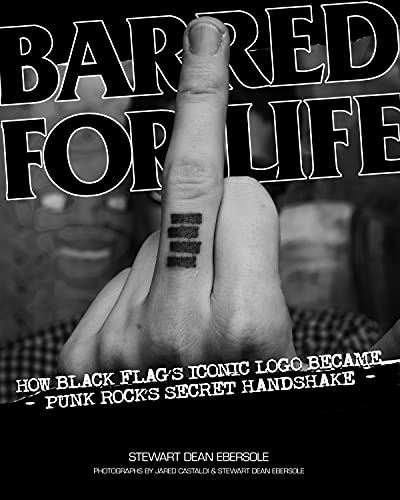 In this fascinating and brutal photographic exploration, the legacy of American Punk Rock pioneers Black Flag is examined through stories, interviews and photographs of diehard fans who wear their iconic logo, The Bars, conspicuously tattooed upon their skin. Stewart Ebersole provides a personal narrative describing what made the existence of Punk Rock such an important facet in his and many other people's lives, as well as the role that Black Flag's actions and music played in sound tracking the ups-and-downs of living as self-imposed cultural outsiders.

While the book is packed with insightful interviews and tales from inked fans and band members, it's Castaldi's beautiful black and white photos that are most impressive, and leap kicking and screaming from the pages. --Bizarre Magazine

"If you're looking to cut through corporate spoon-fed youth cultures of today and get a flavour for what made bands like Black Flag so important to a certain faction of people, this book will put you on the right track." --Riot 77

Description du livre PM Press, United States, 2013. Paperback. Etat : New. Language: English. Brand new Book. Cataloging the legacy of the American punk rock pioneers Black Flag, this photo documentary uses stark, contrasting portraits to share the stories of the die-hard fans who wear the iconic four-barred logo tattooed on their skin. From doctors to homeless punks, stories range from the intensely personal to the absurd as each larger-than-life soul mugs for the camera. Adding to the idea that mixed messages can come from one unifying design, each image is highlighted with a personal quotation, a name and bio, and a Black Flag favorites list. Captured during an extensive tour through the United States, Canada, and Western Europe, this collection serves as a visual testimony to the hyper-distilled mythology that the band is more prevalent now than when it was in service, and serves as a soundtrack for those living as self-imposed cultural outsiders. Interviews with former members of the band, tattoo artists, photographers, and other relevant luminaries round out this ethnography and serve to spotlight Black Flag's vicious live performances, forward-thinking work ethic, and indisputable reputation for acting as both champions and destroyers of the punk rock culture that they helped create. N° de réf. du vendeur AAT9781604863949

Description du livre PM Press, 2013. Paperback. Etat : New. Brand new! Satisfaction guaranteed! ?The Bars represent me finding my people. We were like a tribe. Together we are strong whereas before we felt weak and ostracized.?Barred for Life is a photo documentary cataloging the legacy of Punk Rock pioneers Black Flag, through stories, interviews, and photographs of diehard fans who wear their iconic logo, The Bars, conspicuously tattooed upon their skin. Author Stewart Ebersole provides a personal narrative describing what made the existence of Punk Rock such an important facet of his and many other people?s lives, and the role that Black Flag?s actions and music played in soundtracking the ups and downs of living as cultural outsiders.?The Bars say ?I?m not one of them,? and it also lets the right people know that I am one of them.?Stark black-and-white portraits provide visual testimony to the thesis that Black Flag?s factual Punk-pioneering role and their hyper-distilled mythology are now more prevalent worldwide then when the band was in service. An extensive tour of North America and Western Europe documents dedicated fans bearing Bars-on-skin and other Black Flag iconography. Nearly four hundred ?Barred? fans lined up, smiled/frowned for the camera, and issued their stories for the permanent record.?It is the black flag of anarchism, and that is the opposite of the white flag of surrender.?Barred for Life expands its own scope by presenting interviews with former Black Flag members and those close to the band. Interviews with alumni Dez Cadena, Ron Reyes, Kira Roessler, Keith Morris, and Chuck Dukowski, as well as photographers Glen E. Friedman and Ed Colver, and the man responsible for tattooing The Bars on more than a few Black Flag players, Rick Spellman, round out and spotlight aspects of Black Flag?s vicious live performances, forward-thinking work ethic, and indisputable reputation for acting as both champions and iconoclastic destroyers of the Punk Rock culture they helped to create.?When I see The Bars I think ?Black Flag the band,? but they also represent an entire movement of people that are not going to conform. They are part of a culture of people that stand up for themselves.?. N° de réf. du vendeur SKU1020071