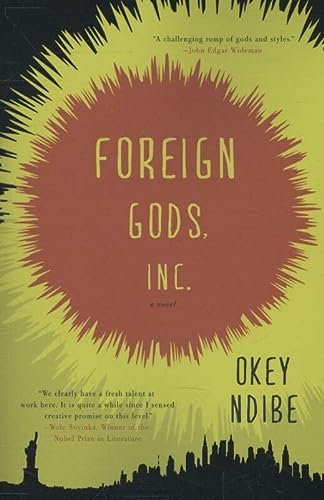 From a disciple of the late Chinua Achebe comes a masterful and universally acclaimed novel that is at once a taut, literary thriller and an indictment of greed's power to subsume all things, including the sacred.Foreign Gods, Inc., tells the story of Ike, a New York-based Nigerian cab driver who sets out to steal the statue of an ancient war deity from his home village and sell it to a New York gallery. Ike's plan is fueled by desperation. Despite a degree in economics from a major American college, his strong accent has barred him from the corporate world. Forced to eke out a living as a cab driver, he is unable to manage the emotional and material needs of a temperamental African American bride and a widowed mother demanding financial support. When he turns to gambling, his mounting losses compound his woes.And so he travels back to Nigeria to steal the statue, where he has to deal with old friends, family, and a mounting conflict between those in the village who worship the deity, and those who practice Christianity. A meditation on the dreams, promises and frustrations of the immigrant life in America; the nature and impact of religious conflicts; an examination of the ways in which modern culture creates or heightens infatuation with the "exotic," including the desire to own strange objects and hanker after ineffable illusions; and an exploration of the shifting nature of memory, Foreign Gods is a brilliant work of fiction that illuminates our globally interconnected world like no other.From the Hardcover edition.

"Razor-sharp . . . Mr. Ndibe invests his story with enough dark comedy to make Ngene an odoriferous presence in his own right, and certainly not the kind of polite exotic rarity that art collectors are used to . . . In Mr. Ndibe’s agile hands, he’s both a source of satire and an embodiment of pure terror."
—Janet Maslin, The New York Times

"Okey Ndibe's novel is dramatic and wonderfully detailed, and his prose is absolutely beautiful—he's a deeply generous writer with an excellent ear for dialogue."
—Michael Schaub, NPR

"A story of sweeping cultural insight and absurd comedy . . . rendered with a stoic power that moves the reader more than histrionics possibly could."
—The Washington Post

"Unforgettable . . . Ndibe seems to have a boundless ear fo' the lyrical turns of phrase of the working people of rural Nigeria . . . The wooden deity "has character, an audacious personality,' says one non-African who sees it. So does Ndibe's novel, a page-turning allegory about the globalized world."
—Los Angeles Times

"A hard look at the American dream, which seems to be receding further and further into the distance these days."
—GQ Magazine

"This is precisely the kind of novel that makes one anti-social. If you find it today, sprint home, throw away your cellphone, bolt the front door and don’t worry too much if you are not up in time for church tomorrow."
—Daily Nation (Kenya)

"Captures the character of the intelligent yet deluded Ike, whose trip to Nigeria puts him face to face with the yawning need of nearly everyone he knows. And where there isn't need, there is greed."
—Chicago Tribune

“We clearly have a fresh talent at work here. It is quite a while since I sensed creative promise on this level.”
—Wole Soyinka, winner of the Nobel Prize in Literature

“An entertaining, witty adventure . . . Foreign Gods, Inc. is an intelligent, satirical novel that comes highly anticipated and does not disappoint.”
—The Root

"A morality tale for our time . . . With subtle hints at moral turmoil, a gift for dark humour, and characterisation that is perceptive and neatly observed, Ndibe manages to persuade the reader to root for Ike, even as his haphazard plans begin to unravel."
—The Guardian (UK)

"Dazzling . . . It's already obvious that 2014 is going to be a big year for African novels . . . but Okey Ndibe is bound to set himself apart from the pack. Who doesn't want to read a novel about a good god heist?"
—The Guardian Africa Network

"A New York novel, an everyman immigrant story, and a moving page-turner wrapped into one."
—Manhattan Magazine

"Ndibe is a writer’s writer, and this book is a lesson in the art of the novel."
—New York Journal of Books

"Okey Ndibe’s Foreign Gods, Inc is one of the most impressive African novels that I have read in years.  Comic, sad—even tragic—Ndibe is a master craftsman, weaving his narrative with ethnic materials (and surprises) and a profundity that will startle you by the end of the story . . . Ikechukwu Uzondu’s journey into his past is as moving and frightful as Brutus Jones’ fate in Eugene O’Neill’s masterpiece, The Emperor Jones.  Clearly, this is one writer to watch. Moreover, his insights into both America and Nigeria will take your breath away."
—Charles R. Larson, CounterPunch

"A freshly and heartbreakingly recast tale of American immigration, with all its longings, disappointments, effacements and reclamations."
—The Cleveland Plain Dealer

"A powerful novel . . . Foreign Gods, Inc. gives voice to the many talented people stranded, like Ike, between countries. All of us ought to be listening."
—The San Antonio Express-News

"Foreign Gods, Inc. reads like the narrative of a taxi-driving Faust in modern Nigeria and America. With Moličre-like humorous debunking of religious hypocrisy and rancid materialism, it teems with characters and situations that make you laugh in order not to cry."
—Ngũgĩ wa Thiong'o, author of Wizard of the Crow

"Foreign Gods, Inc. is a blistering exploration of the contemporary African immigrant experience in America. Ndibe tackles tough questions: from the shifting notions of home and identity to the nature of greed. In prose which is fresh and often funny, Ndibe draws the reader into the heartbreaking story of Ike Uzondu's attempt to survive in a world which seems determined to crush him."
—Chika Unigwe, author of On Black Sisters Street

"The best-laid plans often go awry. But they can certainly make for an entertaining read."
—The New York Post

"Neither fable nor melodrama, nor what's crudely niched as 'world literature,' the novel traces the story of a painstakingly-crafted protagonist and his community caught up in the inescapable allure of success defined in Western terms."
—Publishers Weekly, STARRED Review

"If you’ve ever sat in the back of a cab silently—or not so silently—wondering where your cab driver is from and what his life is like (and really hasn’t everyone?) then you will be captivated by Nigerian writer Okey Ndibe’s new novel."
—Metro New York

"Unsuppressible, Okey Ndibe’s Foreign Gods, Inc. is a splendid work of art that belongs in every reader’s collection. In a masterful manner, Ndibe manages to blend the traditional belief of his Igbo ethnic group in Nigeria with the challenges that face many young and ambitious African immigrants in the USA. The social benefit of the book is immense."
—Sahara Reporters

"Foreign Gods, Inc. leaves readers with this warning: be mindful about the powers you serve, and careful about the ones you seek to cross."
—The Rumpus

"Ndibe writes with a folksy inclusiveness. The village humor, the greetings and teasing, lend the Utonki sequences a lyrical magic . . . Into this richly stocked brew of characters, Ndibe skillfully introduces suspense in the final stretch, guiding readers through the tension of getting through customs Nigerian-style . . . As an author with a foot in Nigeria and the U.S., he expertly brings both worlds to life."
—Shelf Awareness

"Wonderfully colorful . . . There's more than a touch of Poe, or perhaps The Twilight Zone, in the surreal conclusion of this story."
—The Hartford Courant

"This is a heist story like no other . . . Ndibe unfurls his rich narrative gradually, allowing room for plenty of character interaction while painting a revealing portrait of contemporary Nigeria. With piercing psychological insight and biting commentary on the challenges faced by immigrants, the novel is as full-blooded and fierce as the war deity who drives the story."
—Booklist

"On the surface, Foreign Gods, Inc. is a heist book about a Nigerian cab driver in New York trying to steal an ancient statue from his village in Nigeria. But Okey Ndibe’s novel delivers far more than that description suggests, tackling everything from tradition to trying to make it in America, and the way Western countries view the rest of the world."
—Jason Diamond, Flavorwire

"Ndibe’s novel takes on serious themes of cultural exchange, but it does so in a decidedly comic fashion. All the characters Ike encounters, in New York and in Nigeria, inject their own brands of humor into the story."
—Chapter16, Tennessee

“Ndibe takes his readers on a transfixing and revelatory journey from bitter bad faith to  hard won, deeply moving and adult redemption.”
—Francisco Goldman, author of Say Her Name

"A testament to Ndibe's talent and a reason to put him on the list of authors to keep on your radar."
—Out of the Gutter

Description du livre Etat : Good. 3 - 8 average business day shipping. 97 % + We ship same or next business day. Shipping transit days depend on distance from our California location pse keep track of bad weather, can cause delays. We use an expeditor as well as direct drops at US Postal Service twice daily Pacific Time. End delivery is always US Postal Service. Customer service in the California / United States Only, Pacific Time M - F. PLEASE READ CONDITION NOTES: Every copy graded checked, we always downgrade. Functional copy for everyday use. Tight binding, no food or drink stains, no tobacco smell. May have written notes, highlighting that do not obscure text, reading or use. May have overstock mark on spine. Never former libris. May or may not have dust cover and please check condition, we are happy to check for you. DJs may MISSING have small nicks and tears, or taped and intact. Any lower condition we downgrade to acceptable. Please message any questions. N° de réf. du vendeur 41YMQT001I3H

Description du livre Paperback. Etat : Very Good. The book has been read, but is in excellent condition. Pages are intact and not marred by notes or highlighting. The spine remains undamaged. N° de réf. du vendeur GOR006237431