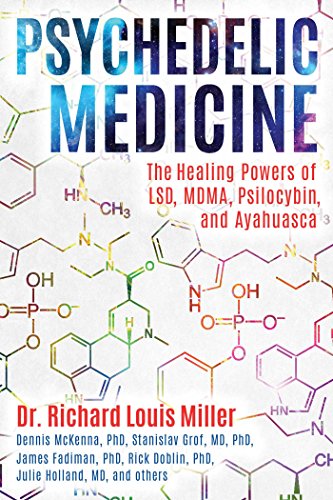 Schedule: I (No recognized medical use and high potential for abuse)

Rick Doblin, Ph.D., is the founder and executive director of the Multidisciplinary Association for Psychedelic Studies (MAPS). He received his doctorate in public policy from Harvard’s Kennedy School of Government, where he wrote his dissertation on the regulation of the medical uses of psychedelics and marijuana. His professional goal is to help develop legal contexts for the beneficial uses of psychedelics and marijuana, primarily as prescription medicines but also for personal growth for otherwise healthy people, and eventually to become a legally licensed psychedelic therapist.

RLM: Now it's over 25 years from when you started MAPS. Tell us about the research that MAPS is sponsoring in these various psychedelic medicines.

RD: The good news is that there is now more psychedelic research taking place around the world than at any time in the last 40 years. We’re basically combining science, politics, and psychedelics. . . . Our resources are limited and we want to do work that will have the biggest appeal to the American public.

Two Phases Down, One More to Approval

RD: We started from what are called Phase I studies--working in a healthy population to evaluate what the drug does--to get a sense of the risk of MDMA, and to get a sense of the potential patients. Phase II is where you can start working with patients, and Phase III are the large-scale, definitive studies.

We're in the middle of the Phase II stage all over the world--working with patients. The first disorder we have chosen to work with is post-traumatic stress disorder (PTSD). People are very sympathetic to those who have been victimized and survived childhood sexual abuse, or adult rape and assault, or particularly now veterans and soldiers with PTSD from the wars in Iraq and Afghanistan or in Israel, from wars and terrorism all over the world.

I think MDMA will be the first drug to be integrated into our culture, and I think PTSD is likely to be the first clinical indication. We're seeing lots of support for this. That's why we're being invited to go to the Pentagon to present this proposal. Combining these two directions-- both the politics of drug regulation and also psychotherapy--has led me to conclude that MDMA has an excellent chance of making it through the regulatory system.

RD: Every drug has its risks and MDMA is not this magical drug that has no risks. Our model is a male/female co-therapist team in a therapeutic setting. Secondly, it's roughly a 3 1/2-month treatment process. There are initially three weekly, non-drug, 90-minute sessions to build the therapeutic alliance with the therapist and the patients, to come to understand the history of the trauma and how the patient has reacted.

Then there is an MDMA session, which starts at around 10 AM and goes to 6 PM--an eight-hour session. Then people spend the night in the treatment center. The MDMA sessions are followed by a non-drug therapy session the next day--then phone calls every day for a week, then weekly non-drug psychotherapy for a month.

The MDMA sessions in our therapeutic setting are three to five weeks apart. In our first study, we did a series of very complicated and expensive neurocognitive studies, because the claim has been that MDMA will reduce serotonin if it's done too frequently or at too high doses, and then people will supposedly have cognitive deficiencies. We tested that and found no evidence at all. In our therapeutic setting, with pure MDMA, spaced out once a month--three times--there's no evidence that it's harmful.

Now, if people were to do it every other day, I think that would be too frequent. They're looking for a heightened emotionality, deeper feelings of peace and love, and when you just continue to do it too frequently you kind of get muted out in your emotions. You become much more washed out, and drained.

RLM: On the other hand, Rick, I've had patients--couples--who have done it once a week, every single week for up to a year, and they report very beneficial effects.

RD: Yeah. There is so much individual variability.

RD: In terms of frequency, the key part is for me is whether the patient integrated what happened before. I think that's a healthy way to say, “Okay, I'm going to have this experience. It's for the experience itself, but it's also for what I bring back from it--what I’ve learned from it.” And then once you've integrated it, then I think you're ready if you want to do it again.

RLM: The key is bringing the information back over the line, into daily life?

RD: Yeah, that's exactly right. These are tools to help enhance our non-drug life. This is a voyage that you take--like a vacation you take but you come back to your life--and then hopefully you feel refreshed and rejuvenated.

“Imagine that you could ask almost every noteworthy psychedelic researcher not only to discuss their work in depth outside of the jargon of heavy journal descriptions but also to discuss the implications of their work and where it will be going in the future. Imagine an interviewer that knows the research backward and forward and presses each person to think in new directions. It’s all there in Psychedelic Medicine. I have been hoping for some years that there would be a book that I could point to that includes almost everything that’s going on. This is as close as we’re likely going to get. I’m in the book as well which is why I can attest to Miller’s knowledgeable and invaluable questioning.” (James Fadiman, PhD, microdose researcher and author of The Psychedelic Explorer’s Guide)

“We love Dr. Richard Miller’s perceptive, up-close-and-personal interviews with the courageous pioneers of the psychedelic renaissance. Psychedelic Medicine is a treasure trove of insights into psychedelic-assisted psychotherapy’s well-documented ability to facilitate lasting healing and life-changing mystical experience.” (Jerry and Julie Brown, coauthors of The Psychedelic Gospels)

“Lively, in-depth, and insightful interviews with both pioneering and contemporary members of the psychedelic research community. An excellent introduction to many of the themes and figures involved in the recent resurgence of clinical studies with these drugs.” (Rick Strassman, MD, author of DMT: The Spirit Molecule)

“Fascinating conversations between a veteran explorer of altered states of consciousness and many of the leading lights in a new wave of research into psychedelic-assisted therapy. Brings together the science and spirituality of the entheogenic revival.” (Don Lattin, author of Changing Our Minds: Psychedelic Sacraments and the New Psychotherapy)

“An amazing and inspiring read. Dr. Miller has cultivated provocative conversations with luminaries in the field of psychedelic research as well as some solid criticism of modern psychiatry.” (Julie Holland, MD, editor of The Pot Book and Ecstasy: The Complete Guide)