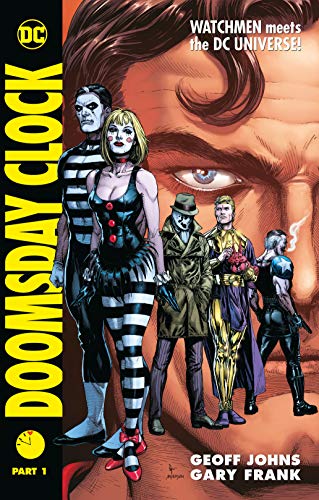 The world of Watchmen collides with the DC Universe in the most shocking story in DC history! Written by master storytellers Geoff Johns and Gary Frank--As the Doomsday Clock ticks toward midnight, the DC Universe will encounter with its greatest threat: Dr. Manhattan. But nothing is hidden from Manhattan, and the secrets of the past, present and future will leave ramifications on our heroes lives forever.

NOTHING EVER REALLY ENDS...

In the long anticipated follow-up to the bestselling graphic novel of all time, the world of Watchmen collides with the DC Universe! Doomsday Clock, from Geoff Johns and Gary Frank, the critically acclaimed team behind Shazam! and Batman: Earth One, is the crossover you never thought you'd see!

Seven years after the events of  Watchmen, Adrian Veidt has been exposed as the murderer of millions. Now a fugitive, he has come up with a new plan to redeem himself in the eyes of the world. The first step? Finding Dr. Manhattan. Alongside a new Rorschach and the never-before-seen Mime and Marionette, he follows Manhattan's trail to the DC Universe, which is on the brink of collapse as international tensions push the "doomsday clock" ever closer to midnight. Is this all Dr. Manhattan's doing?

Spinning out of Watchmen, DC Universe: Rebirth,  and Batman/The Flash: The Button, Doomsday Clock rewrites the past, present, and future of the DC Universe and it all starts here! Collects Doomsday Clock #1-6.

Geoff Johns is an award-winning writer and one of the most popular contemporary comic book writers today. Johns is the author of the New York Times best-selling graphic novels Aquaman: The Trench, Blackest Night, Green Lantern: The Sinestro Corps War, Justice League: Origin, Superman: Brainiac and Batman: Earth One, which hit #1 on the bestseller list. He is also known for transforming Green Lantern into one of the most critically and commercially successful franchises in comics.

Johns was born in Detroit and studied media arts, screenwriting and film at Michigan State University. After moving to Los Angeles, he became an assistant to Richard Donner, director of Superman: The Movie. He and his mentor Donner later co-wrote Superman: Last Son featuring the return of General Zod.

Johns has written for various other media, including episodes of Smallville, Arrow and Adult Swim's Robot Chicken, for which he was nominated along with his co-writers for an Emmy. Johns was an executive producer on the 2016 film Batman v Superman: Dawn of Justice and co-wrote the 2017 hit film Justice League as well as the upcoming Wonder Woman 1984 film starring Gal Gadot. Johns currently resides in Los Angeles, California.