Leftover Women: The Resurgence of Gender Inequality in China 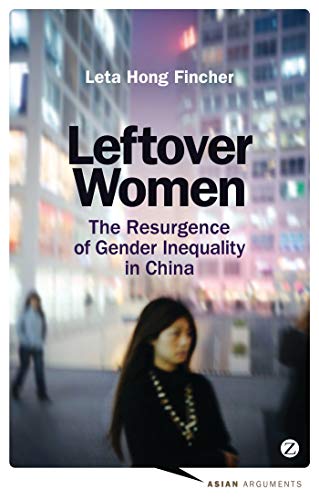 "Leta Hong Fincher has written a shocking account of the way women are treated in the People's Republic" - The Guardian Book Review, by Julia Lovell

"A compelling piece of original research" - The Economist Book Review

"Gender relations, in many ways so much more advanced in China than in India, are going backwards as traditions that were seemingly flattened by Mao re-emerge" - Financial Times Book Review, by David Pilling

"A timely, rich and intricately written book on gender equality in China" - The Telegraph, by Marta Cooper

"[Hong Fincher] demonstrates how discrimination against women can be subtle, almost invisible, yet devastating in its outcomes" - Grist Media Book Review by Pallavi Aiyar

"Leta Hong Fincher's hotly anticipated book, Leftover Women: The Resurgence of Gender Inequality in China...is a timely, thought-provoking read for anyone interested in either China, gender or both" - Libertine Book Review

'A brilliant, compelling, and innovative study of contemporary China and one of the most important sociological inquiries into the political economy of gender. Leta Hong Fincher's richly detailed research and critical analysis of gender politics in "Leftover" Women provide an indispensable resource for anyone who wants to understand the key socioeconomic transformations in postsocialist China.'
Lydia H. Liu, Columbia University, co-editor of 'The Birth of Chinese Feminism'

'Making the most of her experience as a journalist and her training in sociology, Leta Hong Fincher draws on previous breakthrough works in Chinese gender studies and her own interviews, while proving equally at home summarizing statistics and telling poignant tales of individual experience. The result is an engagingly written, thought provoking work on a crucially important but often overlooked subject. Essential reading.'
Jeffrey Wasserstrom, author of 'China in the 21st Century: What Everyone Needs to Know'

'In lively and accessible prose Hong-Fincher demonstrates conclusively that urban professional women have been disproportionately disadvantaged during China's breakneck economic development and largest wealth accumulation in human history. Hong-Fincher exhaustively cites media, government statistics, her own interviews, and her Weibo survey results to substantiate the fact that gender inequality in China has reappeared with a vengeance and shows no signs of abating any time soon.' --Rebecca E. Karl, New York University

'Cast aside what you think you know about the 'empowered' women of China today. Modern Chinese women are under pressure in a society that often locks them out of social equality, property rights, and legal protection from domestic abuse.

This is the reality that China scholar Leta Hong Fincher puts forward in her study of resurgent gender inequality in China. Her book is a well-researched and riveting read, including a number of gripping personal accounts straight from China s so-called 'Leftover Women.'

For any curious observer of China or women s issues, this is one to read.
- Kristie Lu Stout, Anchor/Correspondent, CNN International

A century ago, Chinese feminists fighting for the emancipation of women helped spark the Republican Revolution, which overthrew the Qing empire. After China's Communist revolution of 1949, Chairman Mao famously proclaimed that "women hold up half the sky." In the early years of the People's Republic, the Communist Party sought to transform gender relations with expansive initiatives such as assigning urban women jobs in the planned economy. Yet those gains are now being eroded in China's post-socialist era. Contrary to many claims made in the mainstream media women in China have experienced a dramatic rollback of many rights and gains relative to men.

Combining extensive interviews and surveys with up-to-date research this crucial book will debunk the popular myth that women have fared well as a result of post-socialist China's economic reforms and breakneck growth. Laying out the structural ways in which women are discriminated against in China will speak to broader problems with China's economy, politics and development.