Fortunes of France: The Brethren 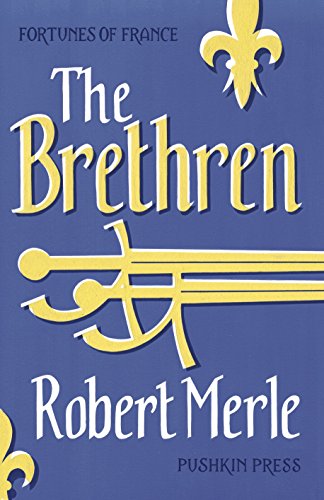 The Perigord of sixteenth-century France is a wild region on the edge of the reaches of royal authority-its steep, forested valleys roamed by bands of brigands and gypsies, its communities divided by conflict between Catholics and converts to the new Protestant faith, the Huguenots. To this beautiful but dangerous country come two veterans of the French king's wars, Jean de Siorac and Jean de Sauveterre, The Brethren-as fiercely loyal to the crown as they are to their Huguenot religion. They make their home in the formidable chateau of Mespech, and the community they found prospers, but they are far from secure-religious civil war looms on the horizon, famine and plague stalk the land, and The Brethren must use all their wits to protect those they love from the chaos that threatens to sweep them away. The Brethren is the first volume in the epic historical drama Fortunes of France-a lusty, exhilarating blend of adventure and romance set against the backdrop of a critical period in European history. 'Swashbuckling historical fiction...For all its philosophical depth [The Brethren] is a hugely entertaining romp...The comparisons with Dumas seem both natural and deserved and the next 12 instalments [are] a thrilling prospect' Christobel Kent, Guardian 'A vivid novel by France's modern Dumas. ..[there is] plenty of evidence in the rich characterisation and vivid historical detail that a reader's long-term commitment will be amply rewarded' Sunday Times 'The mainstay of the novel is swashbuckling action...What stands out is Merle's eye for detail' Spectator 'We're swept away by triumph, tragedy, action and adventure...It's a novel like this that makes reviewing one of the best jobs in the world.' Bookbag, Five Star Review 'Cleverly depicts France's epic religious wars through the intimate prism of one family's experience. It's beautifully written too. Metro. 'Historical fiction at its very best...This fast paced and heady brew is colourfully leavened with love and s

The Brethren (Fortunes of France)

The Brethren (Fortunes of France)