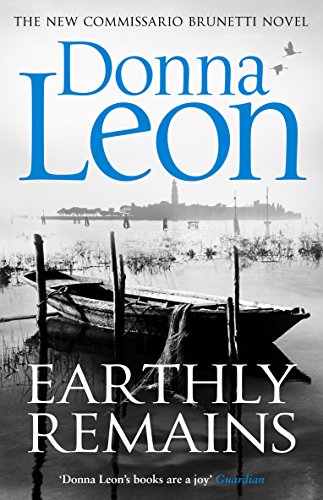 "When she's writing about her beloved Venice, Donna Leon can do no wrong. And Earthly Remains, her new mystery featuring Commissario Guido Brunetti, is one of her best. It's also one of her saddest, dealing as it does with the seemingly unstoppable polluting of the great lagoon . . . Leon dares to try, once again earning the gratitude of her devoted readers." (New York Times)

"Donna Leon’s recreation of Venice and her depiction of the series’ core characters ... is, as always in this long-running series, a triumph." (Literary Review)

"Leon has done for Venice what Morse did for Oxford, or Aurelio Zen for Rome ... Leon is a wonderful writer, the sentences as beautifully crafted as the puparin Casati’s father had long ago built." (The Arts Desk)

"The latest - and 26th - instalment in the best-selling Commissario Brunetti series will not need any recommendation for those familiar with Leon’s accomplished detective series." (RTÉ Guide)

"I sometimes find it difficult to review Donna Leon's books with any original comment as they are consistently good. However, this is an excellent example and as with all her other books I have read, comes highly recommended." (Crimesquad)

Donna Leon was named by The Times as one of the 50 Greatest Crime Writers. She is an award-winning crime novelist, celebrated for the bestselling Brunetti series. Donna has lived in Venice for thirty years and previously lived in Switzerland, Saudi Arabia, Iran and China, where she worked as a teacher. Donna’s books have been translated into 35 languages and have been published around the world.

Her previous novels featuring Commissario Brunetti have all been highly acclaimed; including Friends in High Places, which won the CWA Macallan Silver Dagger for Fiction, Fatal Remedies, Doctored Evidence, A Sea of Troubles and Beastly Things.

Description du livre Cornerstone, United Kingdom, 2017. Paperback. Etat : New. Language: English. Brand new Book. Granted leave from the Questura, Commissario Guido Brunetti decides to finally take a well-earned break and visit Sant'Erasmo, one of the largest islands in the Venetian laguna. The recuperative stay goes according to plan until Davide Casati, the mysterious caretaker of the villa Brunetti has been staying in, goes missing following a sudden storm. Nobody can find him - not his daughter, not his friends, and not the woman he's been secretly visiting . . . Convinced that this was no accident, Brunetti feels compelled to set aside his holiday and discover what happened to the man who had recently become his friend. N° de réf. du vendeur AAZ9781784758141

Description du livre 2017. Paperback. Etat : New. Paperback. Granted leave from the Questura, Commissario Guido Brunetti decides to finally take a well-earned break and visit Sant'Erasmo, one of the largest islands in the Venetian laguna. The recup.Shipping may be from multiple locations in the US or from the UK, depending on stock availability. 320 pages. 0.228. N° de réf. du vendeur 9781784758141

Description du livre 2017. Paperback. Etat : New. Paperback. Granted leave from the Questura, Commissario Guido Brunetti decides to finally take a well-earned break and visit Sant'Erasmo, one of the largest islands in the Venetian lagun.Shipping may be from our Sydney, NSW warehouse or from our UK or US warehouse, depending on stock availability. 320 pages. 0.228. N° de réf. du vendeur 9781784758141