Articles liés ŕ The BBC: Myth of a Public Service

Mills, Tom The BBC: Myth of a Public Service

The BBC: Myth of a Public Service 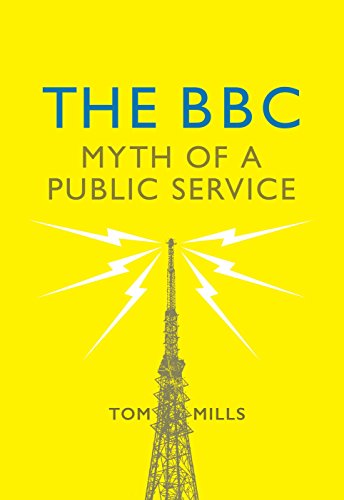 “The BBC is a key element in Britain’s unwritten, and rarely described, constitution. The role it plays is inseparable from the misconceptions that surround it, and that it energetically promotes. Tom Mills has set aside both liberal and conservative fantasies about the institution and describes it as it is in fact. The result is required reading for those who want to understand Britain, and an invaluable resource for those who want to change it for the better.”
—Daniel Hind, author of The Return of the Public: Democracy, Power and the Case for Media Reform

“If ever anyone took seriously Margaret Thatcher’s belief that the BBC was a hotbed of socialist and subversive propaganda, Tom Mills offers the opposite—and, on the face of it, more convincing—view ... Mills traces the corporation’s evolution into a broadly social-democrat organization (in editorial terms, at least), and then into the neo-liberal claque it appears today: business-obsessed, apparently blind or deaf to labour relations and workplace issues, happiest when rolling out corporate mergers and balance books, but just as puppyish in its support of unpopular foreign policy.“
—Sarah Morton, Times Literary Supplement

“Reveals that far from being a sanctuary for independent journalism, the BBC is intimately connected to the power it is supposed to hold to account. This book is a brilliant corrective to mainstream histories of the BBC and a valuable reminder of the need to build a democratic media that is free from vested interests.”
—Des Freedman, Professor of Media and Communication, Goldsmiths

“Impressive ... a direct challenge to the notion of the BBC as a pillar of liberalism and social democracy.”
—Ivor Gaber, Times Higher Education

The BBC: the mouthpiece of the Establishment?

The BBC is one of the most important institutions in Britain; it is also one of the most misunderstood. Despite its claim to be independent and impartial, and the constant accusations of a liberal bias, the BBC has always sided with the elite. As Tom Mills demonstrates, we are only getting the news that the Establishment wants aired in public.

Throughout its existence, the BBC has been in thrall to those in power. This was true in 1926 when it stood against the workers during the General Strike, and since then the Corporation has continued to mute the voices of those who oppose the status quo: miners in 1984; anti-war protesters in 2003; those who offer alternatives to austerity economics since 2008. From the outset much of its activity has been scrutinised by the secret services at the invitation of those in charge. Since the 1990s the BBC has been integrated into the market, while its independence from government and big business has been steadily eroded. The BBC is an important and timely examination of a crucial public institution that is constantly under threat.

1. The BBC: Myth of a Public Service

2. The BBC: Myth of a Public Service