Articles liés ŕ So Vegan in 5: Over 100 super simple and delicious...

So Vegan in 5: Over 100 super simple and delicious 5-ingredient recipes. Recommended by Veganuary 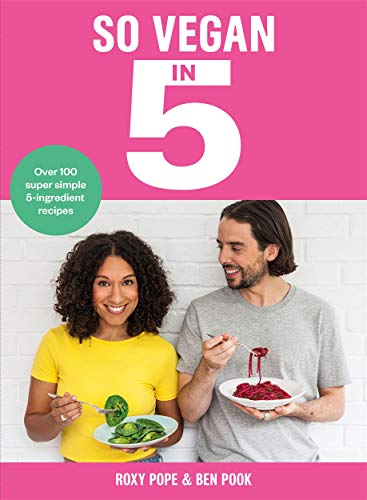 1. So Vegan in 5: Over 100 super simple and delicious 5-ingredient recipes. Recommended by Veganuary (Hardback)

Description du livre Bonnier Books Ltd, United Kingdom, 2018. Hardback. Etat : New. Language: English. Brand new Book. You don't have to be vegan to love vegan food.Want to cook vegan food at home but don't know where to start?Think vegan food is expensive?Unsure where to find the ingredients?Think again!Don't let anyone tell you vegan food is bland, boring or complicated. Roxy and Ben, creators of 'So Vegan' - one of the world's leading vegan recipe channels - will show you how to create fun and super tasty vegan recipes using just five ingredients, proving once and for all that vegan food is for everyone.So whether you're a full-time vegan, a curious carnivore or simply somewhere in between, So Vegan in 5 is your go-to guide for eating more delicious plants, packed with budget-friendly and time-saving recipes for the everyday cook.Vegan couple Roxy and Ben launched 'So Vegan' just over two years ago with the mission to revolutionise the way we think about vegan food. Nothing like So Vegan existed at the time, so the couple decided to take a leap of faith: they devoted all their spare time to developing and filming plant-powered recipes from their cosy south London flat. Fast forward to today, their channel now has over one million followers and their recipes reach a staggering tens of millions of people around the world every month.This book is bursting with over 100 exciting, all-vegan, low-cost and low-ingredient recipes for the time-poor cook. You'll find quick and easy breakfasts, simple and healthy light meals, classic dinners and indulgent desserts, plus so much more.As well as stunning everyday recipes and foodie tips, the book also contains helpful advice on how to live a more sustainable life.Being vegan just became easy."So Vegan in 5 showcases fun and simple recipes and lots of inspiration for Meat Free Mondays!" - Paul McCartney'Here is a cookbook that makes it even easier to make delicious vegan food for someone who can't cook at all, like me! Thank you, Roxy & Ben.' - Chris Martin, Coldplay'A must-have cookbook if you're looking for super simple and tasty vegan recipes during Veganuary!' - Veganuary. N° de réf. du vendeur AA99781788701235

8. So Vegan in 5: Over 100 super simple and delicious 5-ingredient recipes. Recommended by Veganuary

9. So Vegan in 5: Over 100 super simple and delicious 5-ingredient recipes. Recommended by Veganuary