The Logical Structure of Human Behavior 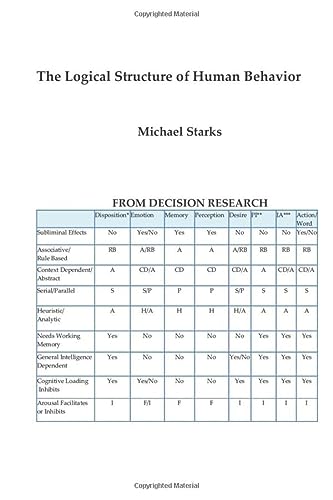 Description du livre Independently Published, United States, 2019. Paperback. Etat : New. Language: English. Brand new Book. It is my contention that the table of intentionality (rationality, mind, thought, language, personality etc.) that features prominently here describes more or less accurately, or at least serves as an heuristic for, how we think and behave, and so it encompasses not merely philosophy and psychology, but everything else (history, literature, mathematics, politics etc.). Note especially that intentionality and rationality as I (along with Searle, Wittgenstein and others) view it, includes both conscious deliberative linguistic System 2 and unconscious automated prelinguistic System 1 actions or reflexes. I provide a critical survey of some of the major findings of two of the most eminent students of behavior of modern times, Ludwig Wittgenstein and John Searle, on the logical structure of intentionality (mind, language, behavior), taking as my starting point Wittgenstein's fundamental discovery -that all truly 'philosophical' problems are the same-confusions about how to use language in a particular context, and so all solutions are the same-looking at how language can be used in the context at issue so that its truth conditions (Conditions of Satisfaction or COS) are clear. The basic problem is that one can say anything but one cannot mean (state clear COS for) any arbitrary utterance and meaning is only possible in a very specific context. I analyze various writings by and about them from the modern perspective of the two systems of thought (popularized as 'thinking fast, thinking slow'), employing a new table of intentionality and new dual systems nomenclature. I show that this is a powerful heuristic for describing behavior. Thus, all behavior is intimately connected if one takes the correct viewpoint. The Phenomenological Illusion (oblivion to our automated System 1) is universal and extends not merely throughout philosophy but throughout life. I am sure that Chomsky, Obama, Zuckerberg and the Pope would be incredulous if told that they suffer from the same problem as Hegel, Husserl and Heidegger, (or that that they differ only in degree from drug and sex addicts in being motivated by stimulation of their frontal cortices by the delivery of dopamine (and over 100 other chemicals) via the ventral tegmentum and the nucleus accumbens), but it's clearly true. While the phenomenologists only wasted a lot of people's time, they are wasting the earth and their descendant's future. N° de réf. du vendeur APC9781798232941

2. The Logical Structure of Human Behavior

3. The Logical Structure of Human Behavior

4. The Logical Structure of Human Behavior