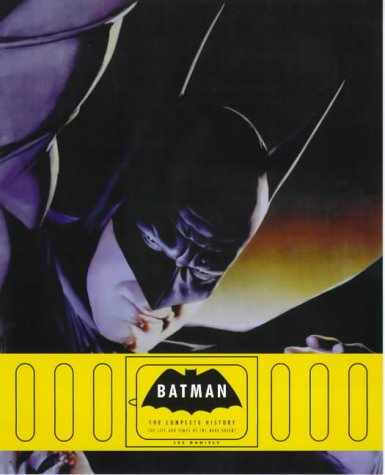 Following on the heels of Superman: The Complete History, author Les Daniels spotlights another famed crime fighter one who is perhaps even more popular than Superman. Batman, the Caped Crusader, the Dark Knight whatever name he goes by, he is recognized by millions of fans as the most enigmatic and complex character in the super hero pantheon. Driven by personal demons, Bruce Wayne has loosed his shadow self on the villainy of Gotham City for 60 years. In celebration of this anniversary, Chronicle Books is proud to offer the first definitive account of Batman's heroic exploits. Les Daniels covers it all from Batman's creation and runaway success in 1939, to the campy antics of the Adam West TV show, to the emergence of Frank Miller's very disturbed and very dark Dark Knight, to the billion-dollar movie franchise and beyond. Illustrated with archival comic book art and rare Batman paraphernalia, Batman: The Complete History also includes a comic book story colored by animator Bruce Timm especially for this book. Designed by Batman fan Chip Kidd, this history will please the hardcore fans, and win many new ones.

Batman and all related characters, names and indicia are trademarks of DC Comics Copyright 1999

The super-powered trilogy that captured the world's greatest superhero triumvirate of all time is now available in paperback. Relive the adventures of Krypton's favorite son inside and outside the comic book world in Superman: The Complete History. Uncover the Caped Crusader's mysterious real-world origin and his evolution into a hugely successful TV and movie franchise in Batman: The Complete History. Follow the Amazon Princess as she evolves from curiosity to feminist icon in the Eisner Award winning Wonder Woman: The Complete History. Each book is filled with enough archival comic book art, photographs, and in-depth history to satisfy the most demanding fan—and is now priced to appeal to the most casual reader.

Superman, Batman, Wonder Woman, and all related characters, names, and indicia are trademarks of DC Comics 2004.

Description du livre Paperback. Etat : Very Good. Color Illustrations (illustrateur). Batman was created 60 years ago, since when he has become an icon of popular culture. This complete history traces his evolution through comic books, graphic novels, movies, television, toys and associated merchandise. It also includes interviews with various of his writers and artists. The book has been read, but is in excellent condition. Pages are intact and not marred by notes or highlighting. The spine remains undamaged. N° de réf. du vendeur GOR002010139

Description du livre Hardcover. Etat : GOOD. Color Illustrations (illustrateur). Spine creases, wear to binding and pages from reading. May contain limited notes, underlining or highlighting that does affect the text. Possible ex library copy, will have the markings and stickers associated from the library. Accessories such as CD, codes, toys, may not be included. N° de réf. du vendeur 3519104076