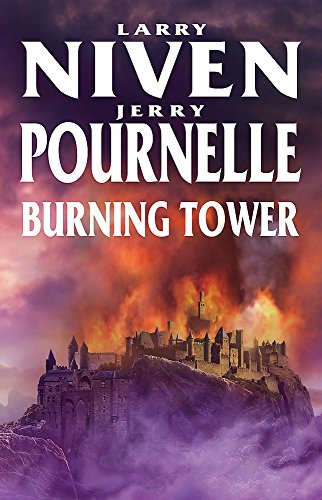 Return to the "vivid and unusual" ( Kirkus Reviews) world of Larry Niven and Jerry Pournelle's The Burning City, where the fire god has retreated into myth, leaving the residents of Tep's Town unprotected for the first time in their history.

Unfortunately, a fiery fate isn't the only danger the town is facing. From out of the desert come monsters -- great birds with blades instead of wings, driven by some unknown force. Although they can be killed, the threat these terror birds pose is worse than death. Danger on the roads means no trade. No trade means that Tep's Town will be no more.

Sent by the Lords of Lordshills to discover the source of the terror birds, Lord Sandry and his beloved, Burning Tower, must travel into a world where magic is still strong -- and where someone or something waits to destroy them!

Filled with the sweeping adventure, memorable characters, and imaginative world-building that have defined the novels of Larry Niven and Jerry Pournelle, Burning Tower is another triumph.

Larry Niven (left) is the Hugo and Nebula Award-winning author of such classics as Ringworld, The Integral Trees, and Destiny's Road. He has also collaborated with both Jerry Pournelle and Steven Barnes on The Legacy of Heorot, Beowulf's Children, and the bestselling Dream Park series. He lives in Chatsworth, California.
Larry Niven and Jerry Pournelle were the joint winners of the 2005 Robert A. Heinlein Award.

Jerry Pournelle (right), a past winner of the John W. Campbell Award, has collaborated with Niven on numerous bestsellers. He has also written such successful solo novels as Janissaries and Starswarm. He lives in Studio City, California.
Larry Niven and Jerry Pournelle were the joint winners of the 2005 Robert A. Heinlein Award.