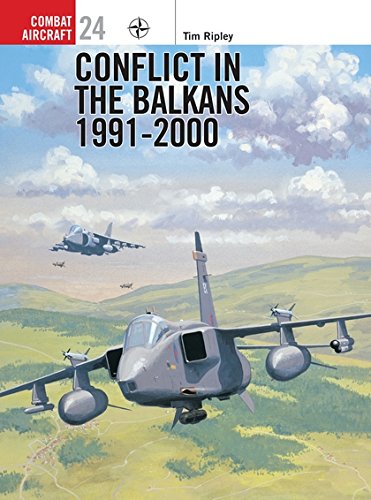 Osprey's examination of aircraft action in the Balkan region during the Yugoslav Wars (1991-2001) as well as during the conflicts that followed up until 2001. Exposing the true scale and significance of the deployment of air power in the Balkans, this book details the activities of NATO and UN aircraft as well as local pilots in the former Yugoslavia. From bombing by B-2 stealth bombers to air-to-air combat; from moving ground troops by helicopter to 'food-bombing' for refugees, air power has played a vital role in 'Europe's Vietnam', and there is little sign that the fires of conflict are being extinguished. Debate amongst air power practitioners has yielded little agreement as to the degree of damage inflicted on the Yugoslav 3rd Army in Kosovo, the Balkans continue to be a region of conflict and ethnic hatred.

Balkan expert Tim Ripley has been fascinated by the conflicts of the former Yugoslavia since 1992, when he submitted his first report on the airlift to the besieged city of Sarajevo. He has since reported extensively on the activities of UN and NATO peacekeeping troops in Bosnia, Croatia, and more recently in Macedonia and Kosovo. His work has appeared in many well respected defence journals, including ‘Jane’s Defence Weekly’, ‘Jane’s Intelligence Review’ and ‘Flight International’. He is the author of ‘Air War Bosnia’ and ‘Operation Deliberate Force’, published by Lancaster University’s Centre for Defence and International Security Studies.