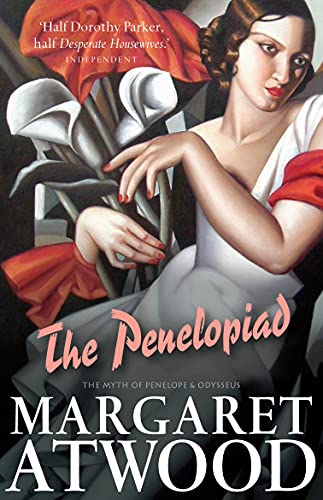 Now that I’m dead I know everything. This is what I wished would happen, but like so many of my wishes it failed to come true. I know only a few factoids that I didn’t know before. It’s much too high a price to pay for the satisfaction of curiosity, needless to say.
Since being dead — since achieving this state of bonelessness, liplessness, breastlessness — I’ve learned some things I would rather not know, as one does when listening at windows or opening other people’s letters. You think you’d like to read minds? Think again.

Down here everyone arrives with a sack, like the sacks used to keep the winds in, but each of these sacks is full of words — words you’ve spoken, words you’ve heard, words that have been said about you. Some sacks are very small, others large; my own is of a reasonable size, though a lot of the words in it concern my eminent husband. What a fool he made of me, some say. It was a specialty of his: making fools. He got away with everything, which was another of his specialties: getting away.

He was always so plausible. Many people have believed that his version of events was the true one, give or take a few murders, a few beautiful seduct­resses, a few one-eyed monsters. Even I believed him, from time to time. I knew he was tricky and a liar, I just didn’t think he would play his tricks and try out his lies on me. Hadn’t I been faithful? Hadn’t I waited, and waited, and waited, despite the temptation — almost the compulsion — to do otherwise? And what did I amount to, once the official version gained ground? An edifying legend. A stick used to beat other women with. Why couldn’t they be as considerate, as trustworthy, as all-suffering as I had been? That was the line they took, the singers, the yarn-spinners. Don’t follow my example, I want to scream in your ears — yes, yours! But when I try to scream, I sound like an owl.

Of course I had inklings, about his slipperiness, his wiliness, his foxiness, his — how can I put this? — his unscrupulousness, but I turned a blind eye. I kept my mouth shut; or, if I opened it, I sang his praises. I didn’t contradict, I didn’t ask awkward questions, I didn’t dig deep. I wanted happy endings in those days, and happy endings are best achieved by keeping the right doors locked and going to sleep during the rampages.

But after the main events were over and things had become less legendary, I realized how many people were laughing at me behind my back — how they were jeering, making jokes about me, jokes both clean and dirty; how they were turning me into a story, or into several stories, though not the kind of stories I’d prefer to hear about myself. What can a woman do when scandalous gossip travels the world? If she defends herself she sounds guilty. So I waited some more.

Now that all the others have run out of air, it’s my turn to do a little story-making. I owe it to myself. I’ve had to work myself up to it: it’s a low art, tale-telling. Old women go in for it, strolling beggars, blind singers, maidservants, children — folks with time on their hands. Once, people would have laughed if I’d tried to play the minstrel — there’s nothing more preposterous than an aristocrat fumbling around with the arts — but who cares about public opinion now? The opinion of the people down here: the opinion of shadows, of echoes. So I’ll spin a thread of my own.

The difficulty is that I have no mouth through which I can speak. I can’t make myself understood, not in your world, the world of bodies, of tongues and fingers; and most of the time I have no listeners, not on your side of the river. Those of you who may catch the odd whisper, the odd squeak, so easily mistake my words for breezes rustling the dry reeds, for bats at twilight, for bad dreams.

But I’ve always been of a determined nature. Patient, they used to call me. I like to see a thing through to the end.

with every goddess, queen, and bitch
from there to here
you scratched your itch

we scrubbed the blood
of our dead
paramours from floors, from chairs

from stairs, from doors,
we knelt in water
while you stared

iii
My Childhood
Where shall I begin? There are only two choices: at the beginning or not at the beginning. The real beginning would be the beginning of the world, after which one thing has led to another; but since there are differences of opinion about that, I’ll begin with my own birth.

My father was King Icarius of Sparta. My mother was a Naiad. Daughters of Naiads were a dime a dozen in those days; the place was crawling with them. Nevertheless, it never hurts to be of semi-divine birth. Or it never hurts immediately.

When I was quite young my father ordered me to be thrown into the sea. I never knew exactly why, during my lifetime, but now I suspect he’d been told by an oracle that I would weave his shroud. Possibly he thought that if he killed me first, his shroud would never be woven and he would live forever. I can see how the reasoning might have gone. In that case, his wish to drown me came from an understandable desire to protect himself. But he must have misheard, or else the oracle herself misheard — the gods often mumble — because it was not his shroud that was at issue, but my father-in-law’s shroud. If that was the prophecy it was a true one, and indeed the weaving of this particular shroud proved a great convenience to me later on in my life.

The teaching of crafts to girls has fallen out of fashion now, I understand, but luckily it had not in my day. It’s always an advantage to have something to do with your hands. That way, if someone makes an inappropriate remark, you can pretend you haven’t heard it. Then you don’t have to answer.

But perhaps this shroud-weaving oracle idea of mine is baseless. Perhaps I have only invented it in order to make myself feel better. So much whispering goes on, in the dark caverns, in the meadows, that sometimes it’s hard to know whether the whispering is coming from others or from the inside of your own head. I use head figuratively. We have dispensed with heads as such, down here.
From the Hardcover edition.

“The Penelopiad is a brilliant tour de force that takes an aspect of The Odyssey and opens up new vistas. . . . Atwood takes Penelope’s braininess and puts her at the centre. . . . Odysseus’s 20-year absence leaves lots of room for development; this is just the kind of thing that a retelling of a myth should do. . . . [Atwood] turns a gruesome, barbaric episode into an ironic tragedy of double agents.”
–National Post

“Two things are apparent when you begin reading The Penelopiad. First, this is a writer who is confidently at the height of her powers. And, second, she’s having fun.”
–The Vancouver Sun

“Atwood’s putting Penelope in the starring role is a fine and fresh revisioning. . . . Somehow (it is a measure of her genius that one cannot quite say how), she makes us hear the voice of Penelope, reflecting in Hades on her life, as if it were the voice of the most interesting gossip you have ever had coffee with. . . . This is a wonderful book.”
–The Globe and Mail

“Feels like a breath of fresh air blown in from the Mediterranean Sea. . . . The Penelopiad is Atwood in top form. The woman who wrote The Handmaid’s Tale hasn’t lost her acerbic touch.”
–The Gazette (Montreal)

“What . . . emerge[s] is a startling commentary on the responsibility of power, and of how privilege can shade into complicity. The Penelopiad is anything but a woe-is-woman discourse. . . . adds Atwood’s sly, compassionate voice to the myth of Odysseus and Penelope and, in doing so, increases its already great depth.”
–Calgary Herald

“In this exquisitely poised book, Atwood blends intimate humour with a finely tempered outrage at the terrible injustice of the maids, phrasing both in language as potent as a curse.”
–Sunday Times (UK)

“Penelope flies with the help of the sardonic, dead-pan voice Atwood lends her, a tone — half Dorothy Parker, half Desperate housewives.”
–The Independent (UK)

“‘Spry’ is a word that could almost have been invented to describe Margaret Atwood, who beadily and wittily retells the events surrounding The Odyssey through the voice of Penelope. Pragmatic, clever, domestic, mournful, Penelope is a perfect Atwood heroine.”
–The Spectator (UK)

“Alter[s] one’s point of view toward [the story], imbuing it with a modern sensibility yet revealing some eternal truths about men, women, and the issue of power, including the power to shape a narrative. . . . Atwood shows with intelligence and wit just how complicated and unpretty love can be.”
–O, The Oprah Magazine

“Along with her presentation of the hallucinatory maids and Penelope’s straight talk about her husband, her girly laments about the ferocious competition of Helen and her queenly worries about fending off the suitors, Atwood’s brilliance emerges in the skillful way she has woven her own research on the anthropological underpinnings of Homer’s epic into the patterns of her own stylized version of the poem. . . . A fascinating and rather attractive version of this old, old story, a creation tale about the founding of our civilization meant to be heard over and over and over.”
–Chicago Tribune

“Atwood paints a shrewdly insightful picture of what life in those days might actually have been like. . . . By turns slyly funny and fiercely indignant, Ms. Atwood’s imaginative, ingeniously-constructed ‘deconstruction’ of the old tale reveals it in a new–and refreshingly different–light.”
–The Washington Times

“Atwood’s 17th work of fiction is a gem...flaunts an acid wit and a generous dose of lyricism...In Atwood’s imagination, Penelope and her handmaids are remarkably complex: They are simultaneously ancient and modern, lighthearted and grief-stricken, disenfranchised and powerful.”
–Baltimore Sun
From the Hardcover edition.