Articles liés ŕ God is Not Great : How Religion Poisons Everything

God is Not Great : How Religion Poisons Everything

God is Not Great : How Religion Poisons Everything 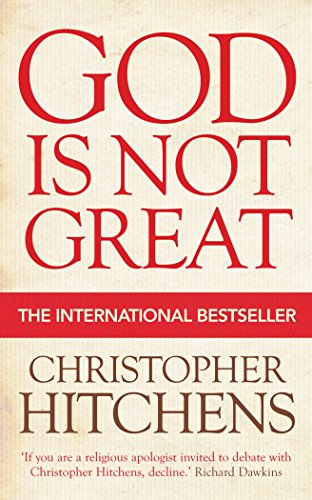 If the intended reader of this book should want to go beyond disagreement with its author and try to identify the sins and deformities that animated him to write it (and I have certainly noticed that those who publicly affirm charity and compassion and forgiveness are often inclined to take this course), then he or she will not just be
quarreling with the unknowable and ineffable creator who–presumably–opted to make me this way. They will be defiling the memory of a good, sincere, simple woman, of stable and decent faith, named Mrs. Jean Watts.

It was Mrs. Watts’s task, when I was a boy of about nine and attending a school on the edge of Dartmoor, in southwestern England, to instruct me in lessons about nature, and also about scripture. She would take me and my fellows on walks, in an especially lovely part of my beautiful country of birth, and teach us to tell the different birds, trees, and plants from one another. The amazing variety to be found in a hedgerow; the wonder of a clutch of eggs found in an intricate nest; the way that if the nettles stung your legs (we had to wear shorts) there would be a soothing dock leaf planted near to hand: all this has stayed in my mind, just like the “gamekeeper’s museum,” where the local peasantry would display the corpses of rats, weasels, and other vermin and predators, presumably supplied by some less kindly deity. If you read John Clare’s imperishable rural poems you will catch the music of what I mean to convey.

At later lessons we would be given a printed slip of paper entitled “Search the Scriptures,” which was sent to the school by whatever national authority supervised the teaching of religion. (This, along with daily prayer services, was compulsory and enforced by the state.) The slip would contain a single verse from the Old or New Testament, and the assignment was to look up the verse and then to tell the class or the teacher, orally or in writing, what the story and the moral was. I used to love this exercise, and even to excel at it so that (like Bertie Wooster) I frequently passed “top” in scripture class. It was my first introduction to practical and textual criticism. I would read all the chapters that led up to the verse, and all the ones that followed it, to be sure that I had got the “point” of the original clue. I can still do this, greatly to the annoyance of some of my enemies, and still have respect for those whose style is sometimes dismissed as “merely” Talmudic, or Koranic, or “fundamentalist.” This is good and necessary mental and literary training.

However, there came a day when poor, dear Mrs. Watts overreached herself. Seeking ambitiously to fuse her two roles as nature instructor and Bible teacher, she said, “So you see, children, how powerful and generous God is. He has made all the trees and grass to be green, which is exactly the color that is most restful to our eyes. Imagine if instead, the vegetation was all purple, or orange, how awful that would be.”

And now behold what this pious old trout hath wrought. I liked Mrs. Watts: she was an affectionate and childless widow who had a friendly old sheepdog who really was named Rover, and she would invite us for sweets and treats after hours to her slightly ramshackle old house near the railway line. If Satan chose her to tempt me into error he was much more inventive than the subtle serpent in the Garden of Eden. She never raised her voice or offered violence–which couldn’t be said for all my teachers–and in general was one of those people, of the sort whose memorial is in Middlemarch, of whom it may be said that if “things are not so ill with you and me as they might have been,” this is “half-owing to the number who lived faithfully a hidden life, and rest in unvisited tombs.”

However, I was frankly appalled by what she said. My little ankle-strap sandals curled with embarrassment for her. At the age of nine I had not even a conception of the argument from design, or of Darwinian evolution as its rival, or of the relationship between photosynthesis and chlorophyll. The secrets of the genome were as hidden from me as they were, at that time, to everyone else. I had not then visited scenes of nature where almost everything was hideously indifferent or hostile to human life, if not life itself. I simply knew, almost as if I had privileged access to a higher authority, that my teacher had managed to get everything wrong in just two sentences. The eyes were adjusted to nature, and not the other way about.

I must not pretend to remember everything perfectly, or in order, after this epiphany, but in a fairly short time I had also begun to notice other oddities. Why, if god was the creator of all things, were we supposed to “praise” him so incessantly for doing what came to him naturally? This seemed servile, apart from anything else. If Jesus could heal a blind person he happened to meet, then why not heal blindness? What was so wonderful about his casting out devils, so that the devils would enter a herd of pigs instead? That seemed sinister: more like black magic. With all this continual prayer, why no result? Why did I have to keep saying, in public, that I was a miserable sinner? Why was the subject of sex considered so toxic? These faltering and childish objections are, I have since discovered, extremely commonplace, partly because no religion can meet them with any satisfactory answer. But another, larger one also presented itself. (I say “presented itself” rather than “occurred to me” because these objections are, as well as insuperable, inescapable.) The headmaster, who led the daily services and prayers and held the Book, and was a bit of a sadist and a closeted homosexual (and whom I have long since forgiven because he ignited my interest in history and lent me my first copy of P. G. Wodehouse), was giving a no-nonsense talk to some of us one evening. “You may not see the point of all this faith now,” he said. “But you will one day, when you start to lose loved ones.”

Again, I experienced a stab of sheer indignation as well as dis-belief. Why, that would be as much as saying that religion might not be true, but never mind that, since it can be relied upon for comfort. How contemptible. I was then nearing thirteen, and becoming quite the insufferable little intellectual. I had never heard of Sigmund Freud–though he would have been very useful to me in understanding the headmaster–but I had just been given a glimpse of his essay The Future of an Illusion.
From the Hardcover edition.

“If God intended reasonable men and women to worship Him without embarrassment, why did He create Christopher Hitchens? It was a fatal miscalculation. In God Is Not Great, Hitchens not only demonstrates that religion is man-made — and made badly — he laughs the whole monstrosity to rubble. This is a profoundly clever book, addressing the most pressing social issue of our time, by one of the finest writers in the land.”
—Sam Harris, Author of the New York Times bestsellers The End of Faith and Letter to a Christian Nation

"Noted, often acerbic journalist Hitchens enters the fray. As his subtitle indicates, his premise is simple. Not only does religion poison everything, which he argues by explaining several ways in which religion is immoral, but the world would be better off without religion. ... With such chapter titles as "Religion Kills" and "Is Religion Child Abuse?" Hitchens intends to provoke, but he is not mean-spirited and humorless. Indeed, he is effortlessly witty and entertaining as well as utterly rational."
— Booklist ** starred review**

"Do yourself a favor and skip the Dawkins and Harris; they're smug, turgid, and boring, with all the human feeling of a tax return. Read Hitchens instead. Test your faith severely or find a champion for your feelings, but read Hitchens. It's a tendentious delight, a caustic and even brilliant book. And with the title alone, he takes his life in his hands, which right there has got to be some proof of his thesis. And so, thank God for Christopher Hitchens."
—Esquire

"Hitchens, one of our great political pugilists, delivers the best of the recent rash of atheist manifestos. The same contrarian spirit that makes him delightful reading as a political commentator, even (or especially) when he's completely wrong, makes him an entertaining huckster prosecutor once he has God placed in the dock. Hitchens's one-liners bear the marks of considerable sparring practice with believers.... this is salutary reading as a means of culling believers' weaker arguments."
—Publishers Weekly

1. God Is Not Great (Paperback)

Description du livre ATLANTIC BOOKS, United Kingdom, 2008. Paperback. Etat : New. Open Market Edition. Language: English. Brand new Book. God Is Not Great is the ultimate case against religion. In a series of acute readings of the major religious texts, Christopher Hitchens demonstrates the ways in which religion is man-made, dangerously sexually repressive and distorts the very origins of the cosmos. Above all, Hitchens argues that the concept of an omniscient God has profoundly damaged humanity, and proposes that the world might be a great deal better off without 'him'. N° de réf. du vendeur LIB9781843548102

5. God is Not Great : How Religion Poisons Everything

Description du livre Atlantic Books Mrz 2008, 2008. Taschenbuch. Etat : Neu. Neuware - Christopher Hitchens, described in the London Observer as 'one of the most prolific, as well as brilliant, journalists of our time' takes on his biggest subject yet--the increasingly dangerous role of religion in the world. With his unique brand of erudition and wit, Hitchens describes the ways in which religion is man-made. 'God did not make us,' he writes. 'We made God.' He explains the ways in which religion is immoral: We damage our children by indoctrinating them. It is a cause of sexual repression, violence, and ignorance. It is a distortion of our origins and the cosmos. In the place of religion, Hitchens offers the promise of a new enlightenment through science and reason, a realm in which hope and wonder can be found through a strand of DNA or a gaze through the Hubble Telescope. 307 pp. Englisch. N° de réf. du vendeur 9781843548102