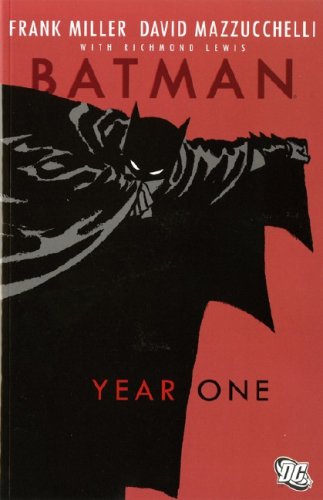 A new trade paperback edition of one of the most important and critically acclaimed Batman adventures ever, written by  Frank Miller, author of  THE DARK KNIGHT RETURNS!

In 1986, Frank Miller and David Mazzucchelli produced this groundbreaking reinterpretation of the origin of Batman — who he is and how he came to be.

Written shortly after THE DARK KNIGHT RETURNS, Miller's dystopian fable of Batman's final days, Year One set the stage for a new vision of a legendary character.

This edition includes the complete graphic novel, a new introduction by writer Frank Miller and a new illustrated afterword by artist David Mazzucchelli. Completing this collection are over 40 pages of never-before-seen developmental material such as character and layout sketches, sample script pages, sketches, and more that pro-vide a glimpse into the making of this contemporary classic.

"You know that saying, 'If you read just one book, this is the one to read'? Well, that applies to BATMAN: YEAR ONE. It's not only one of the most important comics ever written, it's also among the best."--IGN

"There's never been storytelling quite like this. It took someone who views comics as an art to create it."--WASHINGTON POST

"The best thing that Miller has ever written about Batman is the BATMAN: YEAR ONE story."--WIRED

"The artwork by Mazzucchelli--from the Milton Caniff school by way of Alex Toth (Zorro) and Doug Wildey (Jonny Quest)--may be the best Batman has ever had. As for Miller, his characterization of Batman-Bruce Wayne is intelligent and convincing, and his ability to mount an action scene is second to none...an interesting, entertaining update."--LA TIMES BOOK REVIEW

Description du livre Paperback. Etat : Good. Item is in good condition. Some moderate creases and wear. This item may not come with CDs or additional parts including access codes for textbooks. Might be an ex-library copy and contain writing/highlighting. Photos are stock pictures and not of the actual item. N° de réf. du vendeur DS-1845761588-3

Description du livre Soft cover. Etat : Very Good. No Jacket. 1st Edition. Paperback. USA. Book Condition: Very Good. Dust Jacket Condition: None. First Edition. Without Dedication. Surface marks and crease. In Stock.- THANKS! We aim to provide you with an excellent service throughout; Fast delivery guaranteed; Shipped promptly from our UK Warehouse. IN VERY GOOD CONDITION. PLEASE CONTACT US BEFORE ORDERNG THIS BOOK TO CONFIRM BOOK CONDITION. Shipping is normally same day from the UK. "UK BASED SELLER ALL OVERSEAS SHIPPING VIA AIRMAIL". THANKS! We do not stock Ex-Library or Book Club editions. We offer a money back guarantee if you are not fully satisfied, please contact us if you have any questions. Bookseller Inventory #O. 20191001_141329. N° de réf. du vendeur 005319