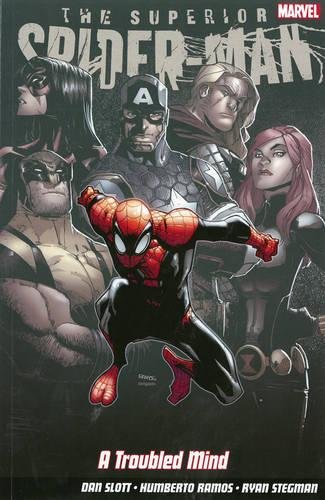 Dan Slott has built a loyal fan base by combining old-school fun with stories and characterizations friendly to new readers. Following a run on She-Hulk - which combined his sly humor and encyclopedic Marvel knowledge with an imaginative take on a comic-book law firm - Slott moved into the upper echelon of Marvel writers, launching Avengers: The Initiative and taking the reins on Mighty Avengers from Brian Michael Bendis. When Marvel gave Spider-Man a fresh start in 2008, Slott was one of several rotating writers on a thrice-monthly Amazing Spider-Man. Through three years and a hundred issues, Slott became the writer most closely identified with the web-slinger's "Brand New Day" era. Amazing hit the "Big Time" when Slott took over as full-time writer, chronicling a new chapter in the life of Peter Parker with artists such as Humberto Ramos, Stefano Caselli and Marcos Martin.

Mexican artist Humberto Ramos made his American comics debut in 1994 with DC's Impulse, featuring the Flash's brash grandson. In 1998, Ramos launched the creator-owned Crimson under Wildstorm's Cliffhanger imprint, illustrating the title for more than two years. He then moved to Marvel, becoming one of the most recognizable and innovative talents in comics. Seamlessly blending both Eastern and Western styles, the artist's artist has worked on many of Marvel's most iconic characters - including Spider-Man, Wolverine and the X-Men - in addition to a run on the fan-favorite Runaways.

An Avenger no more? With the public at large realising this is no longer a """"Friendly Neighborhood"""" Spider-Man, and in light of his actions in recent events, will the Avengers kick Spidey off the team? Also, a new development for a Spider-Man who hasn't been seen for some time. And by time, we mean centuries. More importantly, to save the life of one of Spider-Man's enemies, Peter Parker fights to regain control of his body, his mind, and his destiny! Is this the beginning of the end for Otto Octavius?

Description du livre Paperback. Etat : Very Good. Very Good: a copy that has been read, but is in excellent condition. Pages are intact and not marred by notes or highlighting. The spine remains undamaged. Most items will be dispatched the same or the next working day. N° de réf. du vendeur wbb0016746810

Description du livre Paperback. Etat : Good. Minor shelf wear Good condition is defined as: a copy that has been read but remains in clean condition. All of the pages are intact and the cover is intact and the spine may show signs of wear. The book may have minor markings which are not specifically mentioned. Most items will be dispatched the same or the next working day. N° de réf. du vendeur wbb0017654697