Articles liés ą The War On Heresy: Faith and Power in Medieval Europe

Moore, Professor R. I. The War On Heresy: Faith and Power in Medieval Europe

The War On Heresy: Faith and Power in Medieval Europe 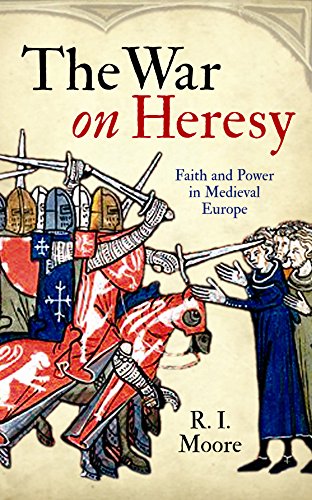 The War on Heresy The great war on heresy obsessed medieval Europe in the centuries after the first millennium. This title focuses on the motives and anxieties of those who declared and conducted the war: what were the beliefs and practices they saw as heretical? How might such beliefs have arisen? And why were they such a threat? Full description

'Moore makes a very powerful case ... if only half of his revolutionary new claims are accepted, every encyclopedia entry on the Cathars (and, I would guess, most of the 1,190,000 websites listed for 'Cathar' on Google) will have to be completely rewritten' Daily Telegraph

'Wide-ranging, beautifully written, and compellingly argued, this is a book that overturns the traditional picture' Times Literary Supplement

'An intellectual thriller ... An absolute page-turner ... Startling, unsettling and revelatory, The War on Heresy is Homeland in cowls' Toronto Globe and Mail

'Moore's approach to Catharism is intriguing and provocative. [This is] an accessible and up-to-date history of the rise of heresy persecution in the medieval West. The book will inspire ample criticism and defenses among scholars. Amateur historians will find a pleasing expository style burnished with colorful details' America

'Moore, a leading scholar of medieval heresy, has turned the classic story on its head by suggesting no international heretical movement existed during the Middle Ages ... To his immense credit, he tells this new story in a measured, nuanced, readable account designed for a wide audience' Choice

'A bold new vision' The Historian

'A very impressive study, made all the more accessible by the author's admirably lucid writing style' Church History

'The book under review here is a brilliant and sobering meditation on this theme ... The War on Heresy is a triumph' --Standpoint
'A lucid narrative, rich in anecdote ... elegant and intelligent' -- --Literary Review

The great war on heresy obsessed medieval Europe in the centuries after the first millennium. R. I. Moore's vivid narrative focuses on the motives and anxieties of those who declared and conducted the war: what were the beliefs and practices they saw as heretical? How might such beliefs have arisen? And why were they such a threat?In western Europe at AD 1000 heresy had barely been heard of. Yet within a few generations accusations had become commonplace and institutions were being set up to identify and suppress beliefs and practices seen as departures from true religion. Fears of heresy inspired passions that moulded European society for the rest of the middle ages and resulted in a series of persecutions that left an indelible mark on its history and culture. Popular accounts of events - most notably of the Albigensian Crusade led by Europe against itself - have assumed the threats posed by the heretical movements were only too real. Some scholars by contrast have tried to show that reports of heresy were exaggerated or even fabricated: but if they are correct why was the war on heresy launched at all? And why was it conducted with such pitiless ferocity? To find the answers to these and other questions R. I. Moore returns to the evidence of the time. His investigation forms the basis for an account as profound as it is startlingly original.

1. The War On Heresy: Faith and Power in Medieval Europe

Description du livre Profile Books, 2012. Hardcover. Etat : New. Etat de la jaquette : New. 1st Edition. In this book, the author tells the deeply troubling story of how heretics became a persecuted minority not so much because of their beliefs, but because of the anxieties, needs and ambitions of their persecutors, Please note: The postal rate for this title within Australia will vary between A$13.80 and A$23.00. Please check with the seller. N° de réf. du vendeur 000924