Operation Crossbow: The Untold Story of Photographic Intelligence and the Search for Hitler's V Weapons 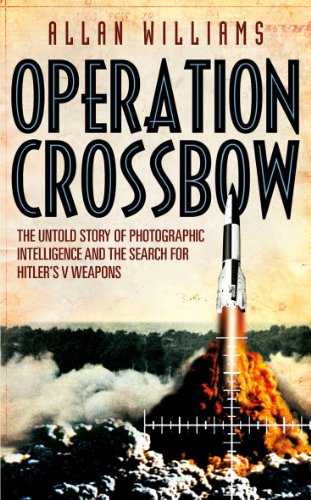 Operation Crossbow Tells the story of the photographic intelligence work undertaken from a country house at Medmenham, Buckinghamshire, is one of the great lost stories of the Second World War. This book is about human endeavour and derring-do. Full description

The story of the photographic intelligence work undertaken from a country house at Medmenham, Buckinghamshire, is one of the great lost stories of the Second World War .

At its peak in 1944, almost 2,000 British and American men and women worked at the top-secret Danesfield House, interpreting photographs - the majority stereoscopic so they could be viewed in 3D - to unlock secrets of German military activity and weapons development. Millions of aerial photographs were taken by Allied pilots, flying unarmed modified Spitfires and Mosquitos on missions over Nazi Europe. it was said that an aircraft could land, the photographs be developed and initial interpretation completed within two hours - marking the culmination of years of experiments in aerial intelligence techniques.

Their finest hour began in 1943, during the planning stages of the Allied invasion of Europe, when Douglas Kendall, who masterminded the interpretation work at Medmenham, led the hunt for Hitler's secret weapons. Operation Crossbow would grow from a handful of photographic interpreters to the creation of a hand-picked team, and came to involve interpreters from across the Medmenham spectrum, including the team of aircraft specialists led by the redoubtable Constance Babington Smith. In November that year, whilst analysing photographs of Peenemunde in northern Germany, they spotted a small stunted aircraft on a ramp. This intelligence breakthrough linked the Nazi research station with a growing network of sites in northern France, where ramps were being constructed aligned not only with London, but targets throughout southern Britain.

Through the combined skill and dedication of the Crossbow team and the heroism of the Allied pilots, throughout late 1943 and 1944 V-weapon launch sites were located and through countermeasures destroyed, saving hundreds of thousands of lives, and changing the course of the war.

Operation Crossbow is a wonderful story of human endeavour and derring-do, told for the first time.

Allan Williams is the curator of the National Collection of Aerial Photography (NCAP), which holds over 10 million aerial photographs from Medmenham that record many key moments of Second World War history. A leading authority on the history of aerial photography, Allan undertook much of the research for the landmark BBC documentary Operation Crossbow, in conjunction with the Medmenham Collection, which protects and encourages work on the Medmenham legacy. He lives in Edinburgh.

1. Operation Crossbow: The Untold Story of Photographic Intelligence and the Search for Hitler's V Weapons