Vercors 1944: Resistance in the French Alps 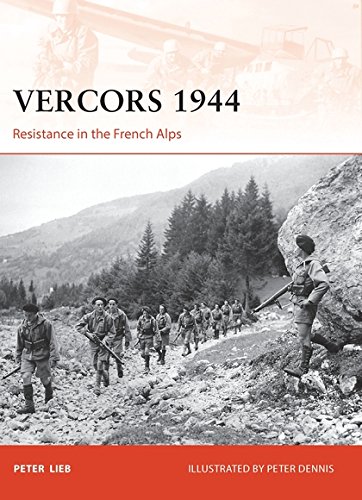 Fighting insurgents has always been one of the greatest challenges for regular armed forces during the 20th century. From Malaya through Algeria and Vietnam to the ongoing operations in Iraq and Afghanistan, the list is long. The war between the Germans and the French resistance, also called FFI (Forces Françaises d'Intérieur) or Maquis, during World War II has remained a near-forgotten chapter in the history of these 'Small Wars', particularly in the English-speaking world. This is all the more astonishing as agencies like the British SOE (Special Operations Executive) and the American OSS (Office of Strategic Services) pumped a good amount of their resources into the support of the French resistance movement. By diversionary attacks on German forces in the occupied hinterland the Allies hoped the FFI could provide assistance in disrupting German supply lines as well as crumbling their morale. The mountain plateau of the Vercors south-west of Grenoble was the main stronghold of the French Maquis and in July 1944 some 8,000 German soldiers mounted an operation on the plateau and destroyed the insurgent groups there. The battle of the Vercors was the largest operation against the FFI during World War II and the German's fast and crushing victory has caused traumatic memories for the French that persist to the present day.

Following D-Day the FFI fully mobilised on orders given from London and posed a real threat to the German lines of communications. Operating from their sanctuaries in the mountains and armed with British and US weapons from Allied air drops, the Maquis descended into the valleys and tried to challenge the German troops of occupation. By mid-June the Germans launched a series of major counter-operations in the mountains which, carried out by the Gebirgsjäger, dispersed the French resistance from the Massif des Bauges and the French Jura. On the mountain plateau of the Vercors the FFI made the mistake of attempting to hold their ground against regular German forces, and were encircled and destroyed, accompanied by terrible reprisals against the local population. British and US liaison teams could do little to help. A month later, a similar operation put paid to the resistance on the Tarentaise. However, the Germans were too short of manpower to exploit these tactical victories and were always compelled to withdraw, letting the French resistance re-appear and take control again. German tactical victories did not translate into strategic success. By their constant harassment the FFI eventually fragmented the German forces. When after the landings at the French Riviera on 15 August 1944 US troops advanced swiftly to the north, German troops could not offer a coherent line of defence in the Alps and had to withdraw from French territory by the end of the month.

"...follows the fighting between Germans and French Resistance forces during World War II, and provides close inspection of the military events that took place during this nearly-forgotten engagement. It was a powerful struggle set against the backdrop of France's southern mountains, and is here documented through source materials, vintage photos, and discussions of encounters, strategies, and military choices. Any collection strong in World War II specifics will find this a winner!"
- The Midwest Book Review (March 2013)

"In addition to the story of the Vercors campaign, this book also goes into the campaign in the nearby Tarentaise Valley, a campaign that also did not go as planned, and for various reasons, the biggest of all being the lack of experienced leadership. It makes for a fascinating read that shows that determination is not all that is required to succeed in battle and while eventually things turned out well (the Allies did drive the Germans out of France), things did not go as planned for the Maquis. It is a book that I found to be quite interesting and one that I am sure you will enjoy as well."
- Scott Van Aken, Modeling Madness (March 2013)

"A relatively little-known but vicious World War II campaign is covered in 'Vercors 1944: Resistance in the French Alps.' Peter Lieb chronicles how the Battle of Vercors was the largest German operation launched against the FFI . He underscores how the crushing defeat triggered traumatic and bitter memories that persist for the French to this day 70 years later. Rare photos, maps and some great color plates by Peter Dennis illustrate this book." -Toy Soldier & Model Figure magazine

Vercors 1944: Resistance in the French Alps

VERCORS 1944: RESISTANCE IN THE