The Precariat: The New Dangerous Class 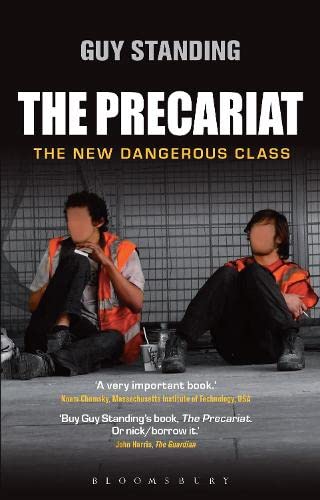 Neo-liberal policies and institutional changes have produced a huge and growing number of people with sufficiently common experiences to be called an emerging class. In this book Guy Standing introduces what he calls 'The Precariat' - a growing number of people across the world living and working precariously, usually in a series of short-term jobs, without recourse to stable occupational identities or careers, stable social protection or protective regulations relevant to them. They include migrants, but also locals. Standing argues that this class of people could produce new instabilities in society. They are increasingly frustrated and dangerous because they have no voice, and hence they are vulnerable to the siren calls of extreme political parties. He outlines a new kind of good society, with more people actively involved in civil society and the precariat re-engaged. He goes on to consider one way to a new better society - an unconditional basic income for everyone, contributed by the state, which could be topped up through earned incomes. This is a topical, and a radical book, which will appeal to a broad market concerned by the increasing problems of labour insecurity and civic disengagement.

Guy Standing is Professor of Economic Security at the University of Bath. He was previoiusly Professor of Labour Economics at Monash University and before that Director of the Socio-Economic Security Programme of the International Labour Organization. He is co-president of the Basic Income Earth Network. His recent books include 'Work after Globalization: Building Occupational Citizenship' (2009) and 'Beyond the New Paternalism: Basic Security as Equality' (2002).

1. The Precariat: The New Dangerous Class

2. The Precariat: The New Dangerous Class