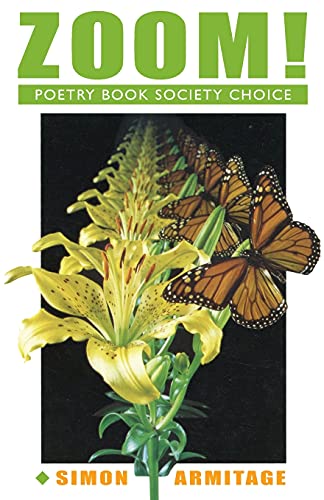 Creates a muscular but elegant language of the author's own slangy, youthful, up to the minuet jargon and vernacular of his native Northern England. He combines this with an easily worn erudition, plenty of nouns and the benefit of blinkered experience.

Simon Armitage was born in 1963 in Huddersfield, England. After studying Geography at Portsmouth Polytechnic, he worked with young offenders before gaining a postgraduate qualification in social work at Manchester University. He worked as a probation officer in Oldham until 1994. He was appointed Poet Laureate in 2019, succeeding Carol Ann Duffy.

His poetry books include Zoom! (Bloodaxe Books, 1989), Xanadu (Bloodaxe Books, 1992), and later collections published by Faber, including Kid (1992), and CloudCuckooLand (1997). He won an Eric Gregory Award in 1988. Zoom! was a Poetry Book Society Choice and was shortlisted for a Whitbread Poetry Award. He was named 'Most Promising Young Poet' at the inaugural Forward Poetry Prize in 1992, won the Sunday Times Young Writer of the Year Award in 1993, and was Poet in Residence for the New Millennium Experience Company in 1999. Mister Heracles (2000), an adaptation of Euripides' Heracles, was commissioned by the West Yorkshire Playhouse. His first Selected Poems was published by Faber in 2001, followed by The Universal Home Doctor (2002). More recently he has published a number of verse adaptations of classic works, including Homer's Odyssey (2006), Sir Gawain and the Green Knight (2007), The Death of King Arthur (2011), and a dramatisation for BBC Radio 4, The Last Days of Troy (2015). His most collections of poetry from Faber are Tyrannosaurus versus the Corduroy Kid (2006), Seeing Stars (2010), Paper Aeroplanes: Poems 1989-2014 (2014) and The Unaccompanied (2017). He is also the author of All Points North(1998), a collection of essays about the north of England; Gig(2008), a memoir of a life of music and poetry; two novels Little Green Man (2001) and White Stuff (2004); and two books chronicling his walks across Britain, Walking Home (2012) on the Pennine Way, and Walking Away (2015) on the South West Coast Path.

Simon Armitage has worked extensively in film, radio and television. He wrote and presented Xanadu (1992), a 'poem film for television', broadcast by BBC television as part of the 'Words on Film' series, and his film about the American poet Weldon Kees was broadcast by the BBC in 1993. He also wrote and narrated Saturday Night, a documentary about Leeds, and Drinking for England, both broadcast by the BBC in 1996 as part of the 'Modern Times' series. Out of the Blue (2008) collects three pieces written in response to the anniversaries of three conflicts: a film-poem about 9/11; a piece commissioned by Channel 5 for VE Day and a radio poem on Cambodia 30 years after the rise of the Khmer Rouge.

Simon Armitage was awarded the Queen's Gold Medal for Poetry 2018, and in May 2019 was appointed Poet Laureate of the United Kingdom.

You couldn't mistake Simon Armitage for any other poet. He has found his voice early, and it really is his own voice - his language and rhythms drawn from the Pennine village where he lives: robust, no-nonsense and (above all) honest. --Peter Sansom

Astonishingly good for such a young writer... poems with an energy which comes directly from life now and the living language. --Carol Ann Duffy, The Guardian

Armitage creates a muscular but elegant language of his own out of slangy, youthful, up-to-the-minute jargon and the vernacular of his native northern England. He combines this with an easily worn erudition, plenty of nous and the benefit of unblinkered experience...to produce poems of moving originality. --Peter Reading, The Sunday Times

Description du livre Bloodaxe Books Ltd, 1989. Etat : New. 1990. 1St Edition. Paperback. Creates a muscular but elegant language of the author's own slangy, youthful, up to the minuet jargon and vernacular of his native Northern England. He combines this with an easily worn erudition, plenty of nouns and the benefit of blinkered experience. Num Pages: 80 pages. BIC Classification: DCF. Category: (G) General (US: Trade). Dimension: 216 x 140 x 6. Weight in Grams: 134. . . . . . Books ship from the US and Ireland. NḞ de réf. du vendeur V9781852240783