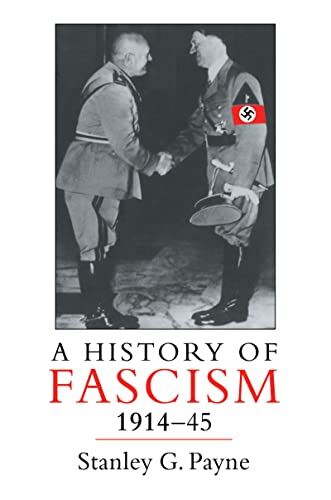 Stanely G. payne here presents a full history of fascism in interwar Europe, as well as a survey of fascist theory and postwar fascism.

The author examines all major fascist movements as well as other forms of authoritarian nationalism and provides a comprehensive work on generic fascism to date. The book traces the phenomenon of fascism through the history of ideas, previous political movements, and the events of the First World War. Although the focus is principally fascist Italy and Nazi Germany, the book also gives detailed attention to the Romanian Iron Guard, Franco's Spain, Japan and proto-fascist movements around the globe.

The author explores the reasons for both the limits of fascism's appeal and the historical transcendence of the "fascist era".The inclusion of other forms of authoritarian nationalism lays a foundation for comparative analysis and leads to a more workable definition of authoritarianism.

It should be useful reading for students studying the rise of totalitarianism in twentieth-century Europe and for those concerned about the rise of ultranationalism today.