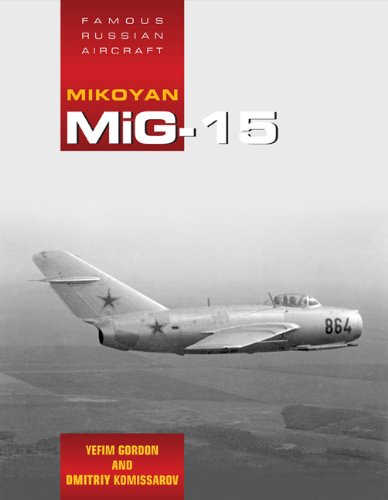 Famous Russian Aircraft: MIG - 15 The definitive history of the Mikoyan Gerevich MiG-15 which provides detailed coverage on every aspect of this famous warplane. Full description

When the Mikoyan Gerevich MiG-15 first appeared in combat against the Western powers during the Korean War it caused consternation amongst its opposition. Its performance far outstripped any jet fighter aircraft produced by the West at the time and its duels with the US F86 Sabre have entered into aviation legend. The success of the MiG-15 was such that it went on to become the most widely produced jet fighter aircraft in history, and although figures vary it is believed over 12,000 were built plus another 6,000 under licence. The protoype of the distinctive fighter, built by the Mikoyan design bureau, with its high swept wing and tailplane and nose intake first flew in 1947, and was first deployed in the Korean War at the start of the 1950s. Although it suffered from handling problems when involved in dogfights with the F86, and a number were shot down, it had been built primarily with the role of interceptor in mind and was highly effective against the US heavy bombers. The MiG-15 was produced in a number of variants, both in single seat and two-seat versions and remained in service as a trainer aircraft for Warsaw Pact countries into the 1970s. Its improved successors, the MiG-17 and MiG-19 became the standard Soviet jet fighters of the early Cold War, including the Vietnam War. The MiG-15 was also produced in Czechoslovakia, Poland and China and aircraft were exported throughout the world. Its rugged build has ensured that a number survive in flying condition today. This book is a worthy addition to the acclaimed 'Famous Russian Aircraft' series, with a comprehensive history of the aircraft s development, design history and use, throughout the world. The comprehensive text is supported by almost 1000 photographs and line drawings as well as over a 100 detailed colour profiles. This will be the definitive book on the market of this historic Soviet jet fighter.

Yefim Gordon is arguably the world's leading Russian aviation researcher. Born in 1950 in Vilnius, Lithuania, he graduated from the Kaunas Polytechnical Institute in 1972 as an engineer/electronics designer. He has been a resident of Moscow since 1973, when, as a hobby, he started collecting photographs and books on the history of Soviet aviation; this has now developed into a major archive. Since the 1980s he has been a professional aviation journalist and writer, with over 50 books published on Soviet/Russian aviation in Russian, English, Polish and Czech, as well as close to 100 magazine features and photo reports. He is also an accomplished photographer, with countless photos published in the Western press; the current edition of Jane's All the World's Aircraft features more than 50 of his photographs.