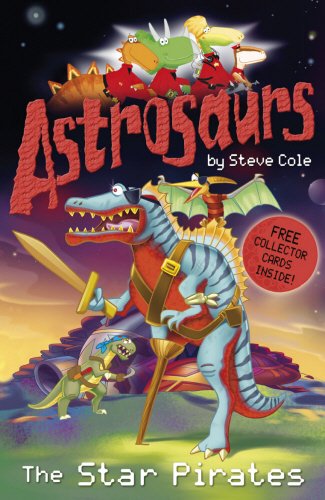 Captain Teggs is no ordinary dinosaur - he's an astrosaur! On the incredible spaceship DSS Sauropod, along with his faithful crew, Gypsy, Arx and Iggy, Teggs rights wrongs, fights evil and eats a lot of grass!

When several spaceships carrying valuable cargos go missing in the same part of space, the astrosaurs investigate - and when some of the treasures turn up on a carnivore world, it seems that meat-eaters are involved. Determined to find out what's happening, Teggs and his crew swap their amazing ship the Sauropod for an old banger that's a much softer target - and soon find themselves under attack from star pirates! These space-faring bandits are the scourge of the stars and are looting any ships they can find for the bounty. But what secret goal are the pirates working towards? Will Teggs find out before he is made to walk the plank, and his loyal crew end up as pieces of 'ate'...?

Teggs is no ordinary dinosaur - he's an ASTROSAUR! Captain of the amazing spaceship DSS Sauropod, he goes on dangerous missions and fights evil - along with his faithful crew, Gipsy, Arx and Iggy.

When several spaceships go missing, the astrosaurs investigate - and find themselves under attack from star pirates! These space bandits are looting ships for their treasure. But they also have a secret plan that threatens the entire universe. Can Teggs stop the star pirates before he has to walk the plank . . . ?

1. ASTROSAURS: THE STAR PIRATES (AS