Articles liés ŕ Where Our Hearts Still Lie: A Life of Harry and Honor...

Susan Woodburn Where Our Hearts Still Lie: A Life of Harry and Honor Maude in the Pacific

Where Our Hearts Still Lie: A Life of Harry and Honor Maude in the Pacific 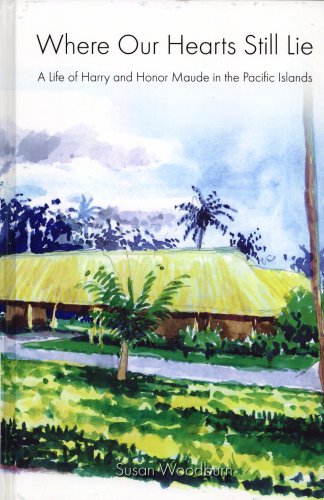 1. A Life of Harry and Honor Maude in the Pacific; WHERE OUR HEARTS STILL LIE

2. Where Our Hearts Still Lie: Harry and Honor Maude in the Pacific

Description du livre Soft cover. Etat : Fine. 279 p., illustrations, bibliography, index. Robert Louis Stevenson's stories of his travels in the South Seas have inspired countless readers to follow in his footsteps and experience for themselves the seductive beauty of the Pacific Islands and their peoples. One of those readers was the twelve-year-old Harry Maude, adapting painfully to lonely boarding-school life in England after a childhood spent within a large household in the heat and noise of India. He in turn would arouse the enthusiasm of the young Honor King who, like Stevenson, was troubled by respiratory problems after a childhood spend in Edinburgh, and in search of a kinder climate and persuade her to join him. So in 1929 the newly wedded Harry and Honor Maude set off for the Pacific, with little more than a yearning for a life together, free from the constraints and prejudices of England, in Stevenson's innocent isles. They found their youthful dreams more than fulfilled, not in lush Tahiti or Samoa, but in the remote and little-known coral atolls of the Gilbert Islands, "where every day was to prove a fresh and joyous adventure of living". Unlike Stevenson, the Maudes would not end their days in the islands, and no memorial stands to their lives there. Dietary deprivations, long periods of separation, war, philosophical and strategic differences with service colleagues, financial security considerations, and the uncertainties engendered by a changing economic and political climate were ultimately to take their toll. Yet the islands where they spent twenty years were always to be as Honor wrote from unhappy exile in Zanzibar in 1936 where our hearts still lie, and they would spend the rest of their long lives researching and writing about them. N° de réf. du vendeur 1863332456CRAWFORD041713