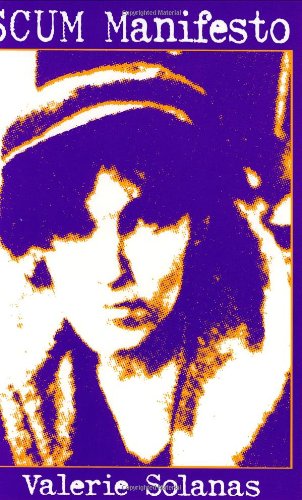 This new edition provocatively places SCUM as a classic among The Communist and other radical manifestos.

SCUM Manifesto was considered one of the most outrageous, violent and certifiably crazy tracts when it first appeared in 1968. Valerie Solanas, the woman who shot Andy Warhol, self-published this work just before her rampage against the king of Pop Art made her a household name and resulted in her confinement to a mental institution. But the Manifesto, for all its vitriol, is impossible to dismiss as just the rantings of a lesbian lunatic. In fact, the work has indisputable prescience, not only as a radical feminist analysis light-years ahead of its time—predicting artificial insemination, ATMs, a feminist uprising against under-representation in the arts—but also as a stunning testament to the rage of an abused and destitute woman.

The focus of this edition is not on the nostalgic appeal of the work, but on Avital Ronell's incisive introduction, "Deviant Payback: The Aims of Valerie Solanas." Here is a reconsideration of Solanas's infamous text in light of her social milieu, Derrida's "The Ends of Man" (written in the same year), Judith Butler's Excitable Speech, Nietzsche's Übermensch and notorious feminist icons from Medusa, Medea and Antigone, to Lizzie Borden, Lorenna Bobbit and Aileen Wournos.

Valerie Solanas (1936-1988) wrote "Up Your Ass," a play; appeared in I, A Man, a film by Andy Warhol; and then shot Andy Warhol in 1968. She was sent to a psychiatric hospital and released after three years. Avital Ronell, a professor of German and Comparative Literature and the chair of the German Department at New York University, is the author of Stupidity, Crack Wars, Finitude's Score, The Telephone Book and Dictations.