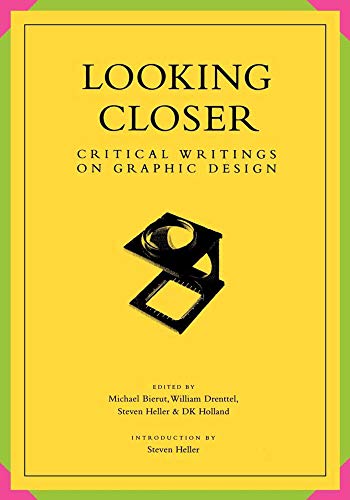 Looking Closer is a collection of the best contemporary writing about graphic design, including theoretical, practical, business-oriented, philosophical, and humorous essays. Selected by a prestigious editorial committee composed of Michael Bierut, William Drenttel, Steven Heller, and DK Holland, the essays reflect on inspiration, ethics, "isms," the impact of new technology, and the role of design in the larger culture.

". . . Looking Closer has some excellent examples of design criticism...There is...much to be learned from this volume. Certain debates within the design field are well-highlighted, issues are raised, valuable information about new work and designers is provided, and high standards for future discourse are set..." --Victor Margolin, Print

"... this eye-catching volume has something for everyone and is a graphic designer's dream..." --Design Management Journal

"...a scholarly volume ... these essays and contributions examine some of the major artistic, design and philosophical arguments evolving in the field today, and are recommended reading for college-level graphic designers..." --The Midwest Book Review

"[the] editors ... have gathered essays, rants, and observations that are indeed significant. The reader takes in history, both recent and long past; reminders of ideas that have triumphed; styles that have crashed and burned; arguments that remain unsettled..."
--Step-By-Step Graphics

Steven Heller is editor of the AIGA Journal of Graphic Design and the chair of the MFA design department at the School of Visual Arts. He is the author or editor of more than seventy books on graphic design, and he is a contributor or contributing editor to nearly 25 magazines, includingPrint, U&lc, Eye Magazine, Communications Arts, ID magazine, Graphis, Design Issues, andMother Jones. Since 1986 he has been senior art director of the New York Times, which he first joined as an art director in 1974. From 1967-1973, he served as art director for numerous publications, including Interview magazine, The New York Free Press, Rock Magazine, Screw magazine, Mobster Times, Evergreen Review, and the Irish Arts Center.
He was awarded three design grants from the National Endowment for the Arts, in 1986,1988, and 1990. In 1996, he received a Special Educators Award from The Art Director's Club of New York. He has been the curator of ten design exhibitions, including "The Art of Satire" at the Pratt Graphics Center and "Art Against War" at the Parsons School of Design. Since 1986, he has directed "Modernism & Eclecticism: A History of American Graphic Design," an annual symposium at the School of Visual Arts. He lives in New York.