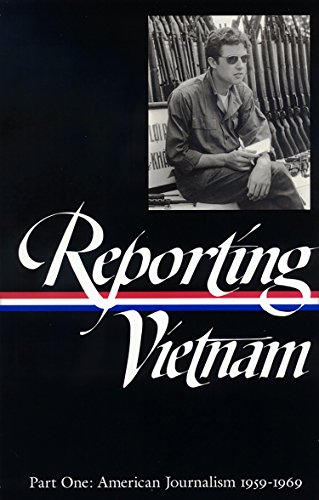 First published for the twenty-fifth anniversary of the fall of Saigon, this unique two-volume anthology from the Library of America evokes a turbulent and controversial period in American history and journalism.

Drawn from original newspaper and magazine reports and contemporary books, this volume along with its companion brings together the work of over eighty remarkable writers to create an unprecedented mosaic view of the war and its impact on an increasingly fractured American society.

Writers who covered the bitter controversy at home are included as well—Meg Greenfield describing an early teach-in, Norman Mailer at the Pentagon March, Jeffrey Blankfort exploring the sorrowful impact of the war on a small town in Ohio. Thomas Johnson and Wallace Terry examine the changing attitudes of African-American soldiers fighting America’s first fully integrated war.

Included in full is Daniel Lang’s Casualties of War, the haunting story of a five-man reconnaissance patrol choosing between good and evil.

This volume contains a detailed chronology of the war, historical maps, biographical profiles of the journalists, explanatory notes, a glossary of military terms, an index, and a 32-page insert of photographs of the correspondents, many from private collections and never before seen.