Articles liés ŕ Turn Me on, Guv: Humorous Tails from the Racecourse

Armytage, Marcus Turn Me on, Guv: Humorous Tails from the Racecourse

Turn Me on, Guv: Humorous Tails from the Racecourse 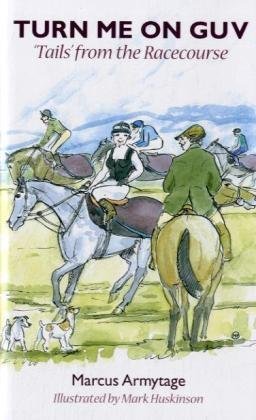 When Mr Frisk steered MARCUS ARMYTAGE to victory in the 1990 Grand National in a time that smashed Red Rum s course record by 14 seconds, the human element in this combination was a 25-year-old amateur rider, pursuing his dream as a part-timer and risking his neck not for remuneration but for the fun of it. No wonder he has a sense of humour. A man s gotta live though and to fund this hobby he started writing about his sport, firstly with the Newbury Weekly News despite spelling weekley wrong on his application for the job and then for the Horse & Hound (to which he has returned as racing correspondent), the Racing Post and, since 1993, with the Daily Telegraph. The relatively recent invention of the spellchecker application has obviously been a godsend to the man. He is also the author of Generous, two collaborations with fellow Grand National winning jockey Richard Dunwoody, Hell For Leather and Hands And Heels and, in 2005, the predecessor to this collection of amusing anecdotes from the world of horseracing, Hot Cherry. MARK HUSKINSON, born in 1935, is from a long line of artists, soldiers and adventurers. His first recorded days hunting was aged two with the Belvoir. At Ampleforth College, the art room, cricket pitch and beagles all took preference over academic studies. Always willing to learn but somewhat reluctant to be taught his period at Edinburgh College of Art was notable for its brevity. Exported to New Zealand for five years he came home to take up farming and engineering before returning to his easel in the late Seventies. The largest private collection of his work is held by the Duke of Bedford and a few of his pictures have found their way into royal collections. He lives and works in Lincolnshire while his winter studio is by the 10th tee of the Vines Golf Club, Western Australia. His biggest claim to fame is appearing in the Who s who of first class cricket on the same page as Sir Len Hutton.

Horseracing, it is often said, is inaccessible to outsiders because it has become much more than which horse is the fastest from A to B. Over the centuries it has developed into a huge industry with language of its own and a complicated set of rules, both social and regulatory, which can often seem incomprehensible to anyone who is not an insider or a regular. To enjoy this collection of hilarious anecdotes, which Marcus Armytage has been producing on a weekly basis in his racing diary for the Daily Telegraph since 1993, it is unnecessary to have even an elementary understanding of the sport. Racing is merely an incidental backdrop, like wallpaper in the downstairs loo - which is precisely where this book should have a permanent place in your home. In Turn Me On Guv these stories frequently involve the gallows humour and hideous misfortune that daily visits those who work in the racing. It will take you closer to the sport s main players and their enduring sense of humour and fun than any biography. Complementing Armytage s anecdotes are the drawings of Mark Huskinson, whose ink and wash cartoons have been entertaining collectors since the late 1970s.

Turn Me On Guv: Tails from the Racecourse

Description du livre Hardcover. Etat : Used; Very Good. Dispatched, from the UK, within 48 hours of ordering. Though second-hand, the book is still in very good shape. Minimal signs of usage may include very minor creasing on the cover or on the spine. N° de réf. du vendeur CHL1549860

Turn Me On Guv: Tails from the Racecourse

Description du livre Hardcover. Etat : Used; Good. Dispatched, from the UK, within 48 hours of ordering. This book is in good condition but will show signs of previous ownership. Please expect some creasing to the spine and/or minor damage to the cover. Ripped/damaged jacket. The dust jacket of this book is slightly damaged/ripped, however, this does not affect the internal condition. N° de réf. du vendeur CHL5002224

Description du livre Hardcover. Etat : Very Good. All orders are dispatched the following working day from our UK warehouse. Established in 2004, we have over 500,000 books in stock. No quibble refund if not completely satisfied. N° de réf. du vendeur mon0005735797

Description du livre Hardcover. Etat : Used; Good. **Simply Brit** Shipped with Premium postal service within 24 hours from the UK with impressive delivery time. We have dispatched from our book depository; items of good condition to over ten million satisfied customers worldwide. We are committed to providing you with reliable and efficient service at all times. N° de réf. du vendeur BB00116633B

Description du livre Hardcover. Etat : Used; Good. **SHIPPED FROM UK** We believe you will be completely satisfied with our quick and reliable service. All orders are dispatched as swiftly as possible! Buy with confidence!. N° de réf. du vendeur mon0002158480

Description du livre Paperback. Etat : Very Good. Horseracing is a serious business, generating GBP 10 billion in annual betting turnover and employing 100,000 people. It can make millionaires and bankrupt others in the flash of a photo-finish. However, since joining the Daily Telegraph, Grand National-winning jockey Marcus Armytage - with an eye and an ear for the ridiculous - has been lightening up the Sport of Kings in his weekly columns and, latterly in the leading equestrian magazine Horse & Hound. Turn me on, Guv brings together a further collection of hilarious racing anecdotes complemented by cartoons from leading caricaturist Mark Hutchinson. The book has been read, but is in excellent condition. Pages are intact and not marred by notes or highlighting. The spine remains undamaged. N° de réf. du vendeur GOR002013306

TURN ME ON GUV - Tails from the Racecourse - Signed By Author