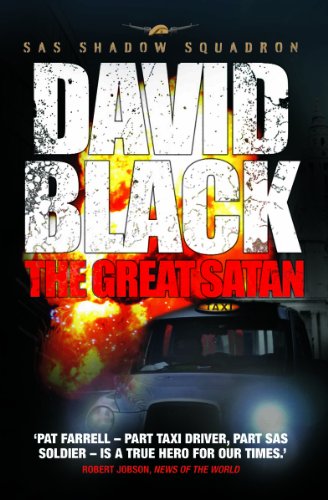 In the bitterly divisive aftermath of the Iraq War, the former political leaders of the UK and USA are condemned as deceitful and mendacious, allegedly fabricating excuses for their martial actions. In The Great Satan, the first of his compelling new Shadow Squadron series, author David Black takes their rationale to its logical conclusion to produce his own fictional nightmare scenario: What if the Iraqi weapons that were said to be dismantled in the late 1990s included the ultimate WMD? And what if the deposing of Saddam Hussein left one of his most ruthless military leaders at large, actively seeking revenge? . . . In The Great Satan, author Black and his main character - Special Forces team leader Pat Farrell - are so close as to be synonymous, both having worked as London taxi drivers during a tenure as Territorial SAS members, ready to be called into action in time of national emergency. The principal difference is that the author is now retired from the forces, while his fictional counterpart is left to contend with 'the real world . . . with direct relevance to the grisly global horrors being perpetrated today.' In The Great Satan, the current world situation meets the page-turning action prose of pulp fiction. The central antagonist is General Jamal Al-Mahdi, veteran of Saddam s campaign against the Kurds, who transports the ultimate hidden WMD to the UK the nuclear bomb that is the greatest Satan of all, awaiting deployment by a young British jihadi at a point where we can only hope fiction diverges entirely from fact . . .

THE GREAT SATAN is the first of the new Shadow Squadron series. Dealing with the dangerous activities of the little-known 'Two Troop' - 21st SAS Squadron - it combines world affairs with fast-moving action in the tradition of Gerald Seymour/BBC1's Spooks. 'I was a part-time SAS Special Forces soldier leading exactly this kind of double life,' says David Black. The author's background will be the subject of press comment by fiction reviewers and defence correspondents.

Description du livre Paperback. Etat : Used; Good. Dispatched, from the UK, within 48 hours of ordering. This book is in good condition but will show signs of previous ownership. Please expect some creasing to the spine and/or minor damage to the cover. N° de réf. du vendeur CHL1298580

Description du livre Paperback. Etat : Good. The book has been read but remains in clean condition. All pages are intact and the cover is intact. Some minor wear to the spine. N° de réf. du vendeur GOR004118259

Description du livre Paperback. Etat : Fair. A readable copy of the book which may include some defects such as highlighting and notes. Cover and pages may be creased and show discolouration. N° de réf. du vendeur GOR005927153