Articles liés à A Thousand Miles Up the Nile: A Woman's Journey...

Edwards, Amelia B. A Thousand Miles Up the Nile: A Woman's Journey Among the Treasures of Ancient Egypt

A Thousand Miles Up the Nile: A Woman's Journey Among the Treasures of Ancient Egypt 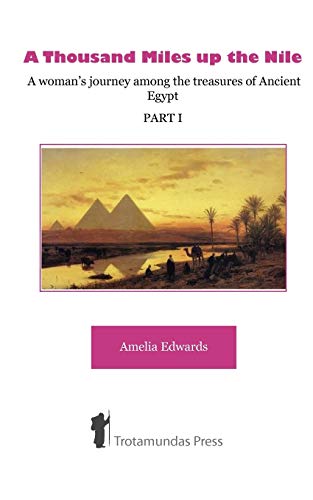 A Thousand Miles up the Nile - Amelia B. Edwards - IT is the traveller’s lot to dine at many table-d’hôtes in the course of many wanderings; but it seldom befalls him to make one of a more miscellaneous gathering than that which overfills the great dining-room at Shepheard’s Hotel in Cairo during the beginning and height of the regular Egyptian season. Here assemble daily some two to three hundred persons of all ranks, nationalities, and pursuits; half of whom are Anglo-Indians homeward or outward bound, European residents, or visitors established in Cairo for the winter. The other half, it may be taken for granted, are going up the Nile. So composite and incongruous is this body of Nile-goers, young and old, well-dressed and ill-dressed, learned and unlearned, that the new-comer’s first impulse is to inquire from what motives so many persons of dissimilar tastes and training can be led to embark upon an expedition which is, to say the least of it, very tedious, very costly, and of an altogether exceptional interest. His curiousity, however, is soon gratified. Before two days are over, he knows everybody’s name and everybody’s business; distinguishes at first sight between a Cook’s tourist and an independent traveller; and has discovered that nine-tenths of those whom he is likely to meet up the river are English or American. The rest will be mostly German, with a sprinkling of Belgian and French. So far en bloc; but the details are more heterogeneous still. Here are invalids in search of health; artists in search of subjects; sportsmen keen upon crocodiles; statesman out for a holiday; special correspondents alert for gossip; collectors on the scent of papyri and mummies; men of science with only scientific ends in view; and the usual surplus of idlers who travel for the mere love of travel, or the satisfaction of a purposeless curiousity.

A Thousand Miles Up the Nile: A Woman's Journey Among the Treasures of Ancient Egypt (Paperback)

Description du livre Paperback. Etat : New. Language: English. Brand new Book. Travelling by dahabiah, a well-appointed sailing craft peculiar to the Nile, and armed with sketch-book and measuring tape, Amelia Edwards carefully recorded all she saw of the temples, graves, and monuments - even discovering a buried chapel of her own- and provided in A Thousand Miles Up The Nile the first general archaeological survey of Egypt's ruins. The book is full of historical footnotes and careful details. Amelia Edwards was responsible for founding the first chair in Egyptology (a science she helped create) at University College London, and was behind the appointment of Sir Flinders Petrie. She established herself as one of the authorities on the subject of Ancient Egypt and her book A Thousand Miles Up the Nile has remained one of the most inspiring travel books in the subject. NḞ de réf. du vendeur AAV9781906393076

Thousand Miles Up the Nile : A Woman's Journey Among the Treasures of Ancient Egypt