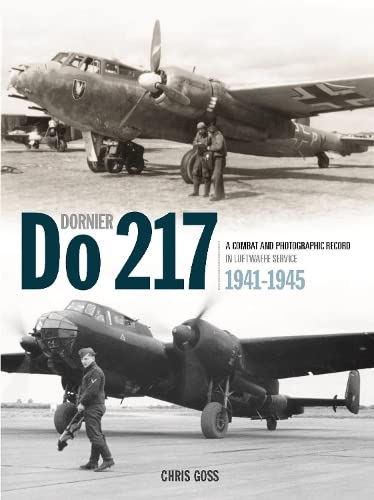 The Dornier Do 217: A Combat and Photographic Record in Luftwaffe Service 1941-1945 (Hardback)

Description du livre Hardback. Etat : New. Language: English. Brand new Book. The Dornier Do 217 represented the refinement of German twin-engine bomber design, a progression from the earlier Do 17. From 1941, the Do 217 became the mainstay of the Luftwaffe's bomber arm in the West, equipping four Gruppen for operations over Britain. It carried out day and night attacks on British shipping, coastal targets, towns and industrial centers, both in formation and in lone attacks known to the German crews as 'Pirate' operations. These missions, though achieving some success, were undertaken at considerable cost to the crews of the Do 217s, a measure of the strength of opposition it encountered in the RAF's nightfighter squadrons, improved radar and anti-aircraft defenses.As the demand from Germany's battlefronts grew from early 1942, the Do 217, albeit in very limited numbers, was developed into a radar-equipped nightfighter. In the Mediterranean it was used as an effective maritime strike aircraft, launching highly developed stand-off bombs and remote-controlled glide-bomb weapons in the form of the 'Fritz X' and Hs 293 which accounted for the destruction or damage of several notable warships. It was also used as a night reconnaissance aircraft on the Eastern Front and over Britain in the Luftwaffe's 1942 'Baedeker Blitz'.Following extensive research, including interviews and correspondence with former aircrew and their families, renowned Luftwaffe historian, Chris Goss, has documented the operational history of the Do 217 and offers the most comprehensive account so far published in the English language. The story is complemented by hundreds of rare photographs, many never published, as well specially commissioned color artwork. NḞ de réf. du vendeur CRY9781906537586