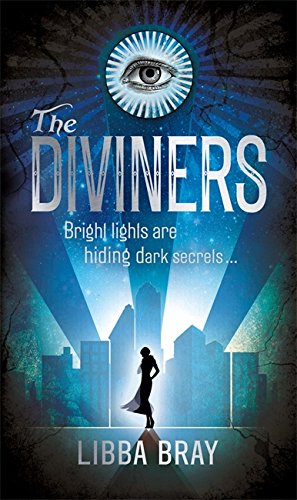 "The Diviners delivers an addictive and terrifying story of young New Yorkers investigating a rash of occult-based murders. Bray sustains a breathless energy throughout this ambitious series-starter, deftly evoking the exuberance of 1920s city life and the evil lurking beneath it."―Entertainment Weekly

* "1920s New York thrums with giddy life in this gripping first in a new [series] from Printz winner Bray...The intricate plot and magnificently imagined details of character, dialogue and setting take hold and don't let go. Not to be missed."―Kirkus (starred review)

* "The compelling and dramatic supernatural plot explores self-actualization, predestination, the secrets everyone hides, and, of course, good versus evil. An absolutely terrific read and, thankfully, the first in a planned series."―School Library Journal (starred review)

* "The book is big and wants to be the kind of thing you can lose yourself in. Does it succeed? It's jake, baby."―Booklist (starred review)

*Everyday moments and a romance or two help lighten the mood of this creepy, dark, twisted tale of things that go bump in the night."―VOYA (starred review)

" [A] lavish supernatural thriller...Wisecracking Evie is a likable heroine, and all signs point to intriguing complications and more malevolent spirits on the rise in succeeding books."―The Horn Book

Do you believe there are ghosts and demons and Diviners among us?
Evie O'Neill has been exiled from her boring old hometown and shipped off to the bustling streets of New York City--and she is pos-i-tute-ly ecstatic. It's 1926, and New York is filled with speakeasies, Ziegfield girls, and rakish pickpockets. The only catch is that she has to live with her Uncle Will and his unhealthy obsession with the occult.
Evie worries he'll discover her darkest secret: a supernatural power that has only brought her trouble so far. But when the police find a murdered girl branded with a cryptic symbol and Will is called to the scene, Evie realizes her gift could help catch a serial killer.
As Evie jumps headlong into a dance with a murderer, other stories unfold in the city that never sleeps. A young man named Memphis is caught between two worlds. A chorus girl named Theta is running from her past. A student named Jericho hides a shocking secret. And unknown to all, something dark and evil has awakened....
Printz Award-winning and New York Times bestselling author Libba Bray opens a brand-new historical series with The Diviners, where the glittering surface of the Roaring Twenties hides a mystical horror creeping across the country.

Description du livre Etat : Good. Ships from the UK. Former Library book. Shows some signs of wear, and may have some markings on the inside. N° de réf. du vendeur GRP73410913

Description du livre Etat : Good. Ships from the UK. Shows some signs of wear, and may have some markings on the inside. N° de réf. du vendeur GRP95008136

8. The Diviners: Number 1 in series

Description du livre Paperback. Etat : Very Good. It's 1920s New York City. It's flappers and Follies, jazz and gin. It's after the war but before the depression. And for certain group of bright young things it's the opportunity to party like never before. For Evie O'Neill, it's escape. She's never fit in in small town Ohio and when she causes yet another scandal, she's shipped off to stay with an uncle in the big city. But far from being exile, this is exactly what she's always wanted: the chance to show how thoroughly modern and incredibly daring she can be. But New York City isn't about just jazz babies and follies girls. It has a darker side. Young women are being murdered across the city. And these aren't crimes of passion. They're gruesome. They're planned. They bear a strange resemblance to an obscure group of tarot cards. And the New York City police can't solve them alone. Evie wasn't just escaping the stifling life of Ohio, she was running from the knowledge of what she could do. She has a secret. A mysterious power that could help catch the killer - if he doesn't catch her first. The book has been read, but is in excellent condition. Pages are intact and not marred by notes or highlighting. The spine remains undamaged. N° de réf. du vendeur GOR004210664