North Kivu: The background to conflict in North Kivu province of eastern Congo 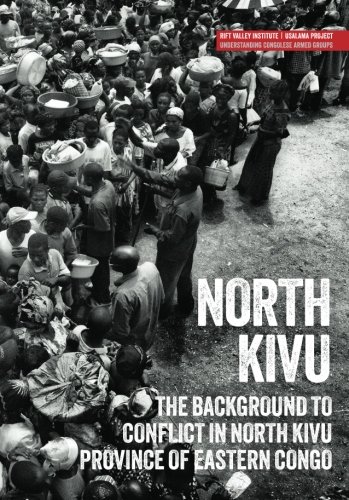 The continuing violence in the eastern Democratic Republic of the Congo (DRC) can be bewildering in its complexity: in the profusion of armed factions, the plethora of acronyms, and the multitude of grievances that trigger outbreaks of conflict—be they political, financial, or ethnic; local, national, or cross-border.

The province of North Kivu has been the epicentre of war in the DRC. It has generated a multitude of armed groups, with over two dozen emerging over the past two decades. It was here that the precursors to the Congo wars began with ethnic violence in 1993, and it is here that the most formidable challenges to stability in the country persist today. The present report sketches the historical backdrop to these conflicts, describing their social, political, and economic dynamics. It focuses on the southern part of North Kivu—in particular the territories of Masisi, Rutshuru, and Walikale—where the Congolese government currently faces the most substantial challenge to its authority.

The armed groups that have emerged in North Kivu have features in common, but there is no comprehensive theory that explains them all. They draw on three sources of instability: local, regional, and national. The Congolese state is decrepit and partial to private interests. It has neither the rule of law to guarantee property rights nor the force of law to suppress armed rivals. This weakness reinforces the belief that the only way of protecting property and individual freedoms is through armed force.

Such violence has exacerbated tensions between local communities, in particular a rift between so-called indigenous groups—those communities whose presence is most entrenched—and the Hutu and Tutsi populations, many of whom arrived as immigrants during the colonial and post-colonial periods. Most of the fighting today draws directly on this cleavage, hardened by two decades of killings on both sides.

Finally, local elites, especially in Kigali and Goma, have developed a stake in armed groups, which they believe maintain their interests—either directly, by providing protection to businesses and their personal security, or indirectly, by bolstering their influence and giving them political leverage.

This potent blend of ethnic discrimination, state weakness and elite interest has rendered the conflict, in the eyes of many outside observers, intractable. But the armed groups also differ significantly. While some emerged organically from the realities of rural life, others were deliberately created by local politicians, and still others were exploited to serve the interests of urban businessmen. Some have lost touch with their initial motivations, while others stick to the pursuit of their founding principles. Most intriguing, from the point of view of policy and advocacy, some have disappeared while others resist and persist. Disentangling these differences can help explain the major obstacles to peace in the region.

Jason Stearns, author of Dancing in the Glory of Monsters: The Collapse of the Congo and the Great War of Africa, was formerly the Coordinator of the UN Group of Experts on the DRC. He is Director of the RVI Usalama Project.

North Kivu: The background to conflict in North Kivu province of eastern Congo