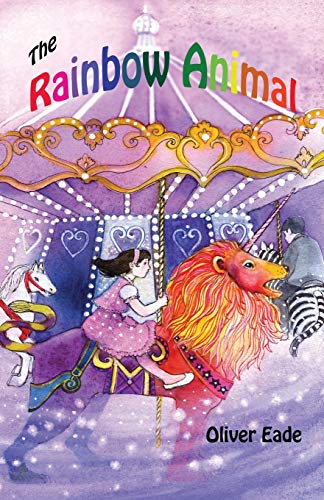 Rachel hides her pet hamster, Waffles, in her dress pocket for a secret ride on the mall carousel in Houston, Texas. Choosing the colorful Rainbow Animal, she ends up in a strange land where the inhabitants of Colorwallytown and Dullabillieville are about to go to war. . . over witches and the color of fish. Rachel, taken to has to lead the Colorwallies as their new military advisor. . . until she encounters class nerd, Alec, advisor for the Dullabillies. A fun story about the futility of war and the need to listen to children.

Description du livre Paperback. Etat : New. Revised 2nd ed. Language: English. Brand new Book. Rachel, a Texan schoolgirl, takes her hamster, Waffles, for a secret ride on the strange carousel rainbow animal in Houston. She ends up in Colourwallytown where people and houses are painted cheerful colours, and gets mistaken for their new military advisor in an impending war with neighbouring black and white Dullabillieville. The reason for the war appears to be a dispute over the true colour of witches. She sees a boy in grey climb down from the zebra and leave the carousel in the direction of Dullabillieville, and is certain he's her studious classmate Alec, accused by kids at school of being the son of witches. Taken in by a kind landlady, Mrs Pink, her hair, shoes and, by mistake, Waffles, are dyed pink to conform with Colourwally regulations. At a bizarre Council of War with President Banana, his nail-painting wife, First Lady Violet, the sheriff, sergeant and a batty General Greengage, the fact that she has no sensible 'military strategy' seems of no importance to the town's leaders. Sheriff Tomato, the nervous Colourwally sheriff, and Sergeant Lobster cause Rachel to giggle most of the time as she tries to lead the Colourwally troops, armed with paint brushes and the formidable 'paint tank', across the river to turn the Dullabillieville river-front houses pretty colours. They meet no resistance in Dullabillieville, apart from the Dullabilly lieutenant's two small children who are having fun splashing coloured paint over themselves. Rachel soon discovers why. The Dullabilly army is the other side of the river busily turning Colourwallytown black and white and grey. Frightened the two sides might actually come to blows and scare Waffles, the girl decides a treaty is called for. Besides, she doesn't believe in witches! She returns, alone, to Colourwallytown to seek out Alec, the Dullabilly military advisor, who turns out to be a nice lad. Together they scheme to hold a tea-party for the opposing factions and arrange a cease-fire. Presidents Banana and Coalface are invited, but only allowed to have pieces of Mrs Pink's cake (the woman's an excellent cook) if both agree to stop hostilities and sign 'The Treaty of Waffles'. Mrs Pink, a widow, is delighted, for she can now offer to look after the children of the Dullabilly lieutenant, Whitestone, a widower whom she secretly likes. Back at the carousel Rachel and Alec dodge the unpleasant true military advisor, Turkey Cupcake, to prevent him getting hold of their treaty. On Rachel's return to the mall in Houston, astride the Rainbow Animal, she finds her mother still reading a magazine on a bench. Only three minutes have passed since the girl last saw her. When she sees Alec holding the Treaty of Waffles, having just dismounted from the zebra, she knows she didn't imagine it all. Alec leaves the treaty in the safe hands of the lady who takes the tokens at the carousel kiosk, and he and Rachel become good friends. Rachel spreads the word around that children who believe in witches are silly.and that Alec is the bravest boy in the school. Although they disagree about things like 'why Sheriff Tomato blinks a lot when he gets nervous', they are agreed on one point: that war is stupid. NḞ de réf. du vendeur AAV9781909411401