Articles liés ŕ On A Sunbeam

Walden, Tillie On A Sunbeam 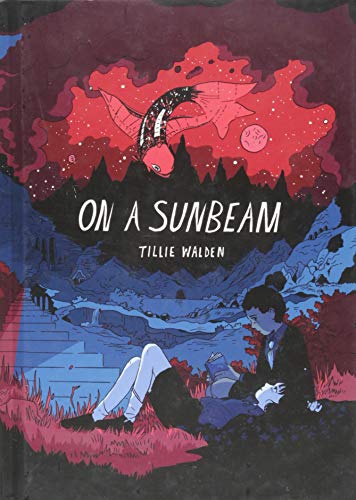 Revue de presse :
"A creator who's half my age and twice as talented as I'll ever be... Tillie Walden is the future of comics, and On a Sunbeam is her best work yet." --Brian K Vaughan, creator of Saga and Paper Girls

":Every now and again, there's a comic that will stop you dead in your tracks and consume your time until you take in every last page and dialogue bubble. That's the case with Tillie Walden's fantastic On A Sunbeam." --Andrew Liptak, The Verge

"Gorgeous... Walden is far and away one of the best cartoonists working today. She crafts such simple stories and images, but they hold universes of emotion and meaning." ----Mey Valdivia Rude, Autostraddle
"Often, the strength of Walden's comics comes from what is left unsaid (or undrawn)... In another writer, the sheer variety of stories might suggest a creator still finding their voice; with Walden, no matter the story, you're in safe hands." --The Guardian

"Walden echoes classic comics genres while rendering them in her own unique visual language... she's an evolutionary leap forward in cartooning, fearless, assured and, most astonishingly, just getting started." -- Heidi MacDonald, Comics Beat

One of the youngest ever Eisner winners, incredible talent Tillie Walden presents a stunning queer space opera – her greatest work to date.

On a Sunbeam is the story of Mia, interwoven between her time as a rebellious schoolgirl at a boarding school in space and her time as crewmember aboard the spacecraft Aktis, where she travels the deepest reaches of space to rebuild and restore beautiful broken-down structures. As the past and present weave together, we discover more about Mia and her roots and how they connect with her present on Aktis. In Walden's words, 'The road ahead is not a comfortable, simple one.'

Walden's inimitable style and presentation are more fully-formed and gorgeous than ever before as she works with her signature themes of sexuality and gender, the individual in landscape, first love and awesome cats.

Originally published as a webcomic, On a Sunbeam was nominated for an Eisner Award in 2017 and won Best Webcomic with Walden winning Best Artist at the 2017 Broken Frontier Awards.

Part love story, part epic space adventure, On a Sunbeam is a masterpiece from an explosive, unmissable talent.

On A Sunbeam (Hardback)

Description du livre Hardback. Etat : New. Language: English. Brand new Book. Throughout the deepest reaches of space, a crew rebuilds beautiful and broken-down structures, painstakingly putting the past together. As Mia, the newest member, gets to know her team, the story flashes back to her pivotal year in boarding school, where she fell in love with a mysterious new student. When Mia grows close to her new friends, she reveals her true purpose for joining their ship - to track down her long-lost love. N° de réf. du vendeur AAT9781910395370